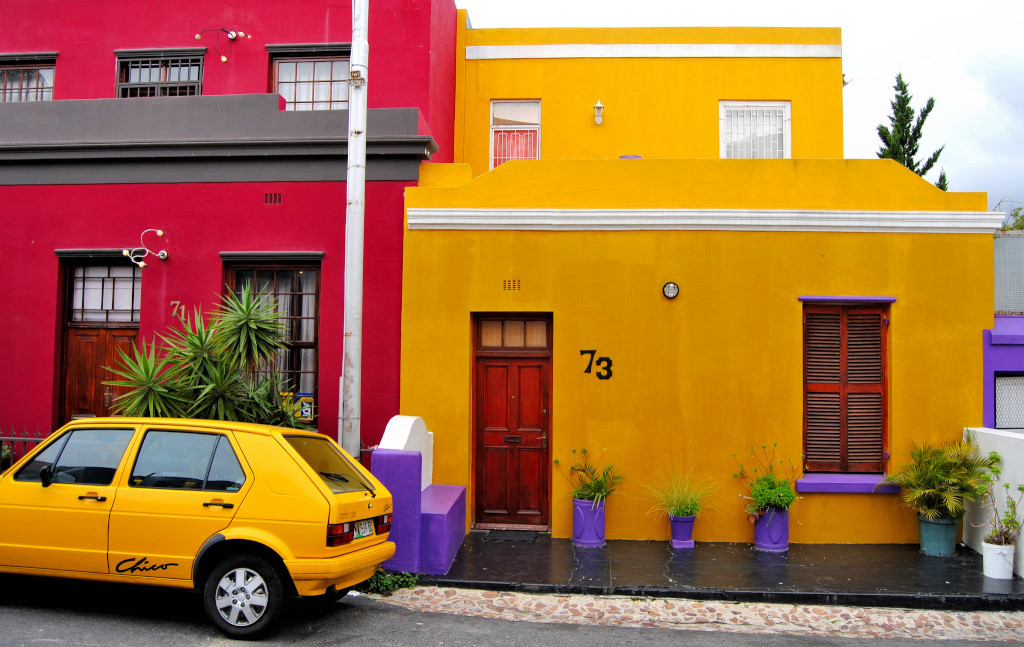 Why You Should Visit Cape Town’s Colourful Bo-Kaap

The hyper-colourful Bo-Kaap neighbourhood in Cape Town, South Africa, is a fascinating corner on planet Earth. The name is an abbreviation of ‘boven Kaap’ or ‘above the cape’. So unsurprisingly, you’ll find the neighbourhood upward from the city centre, on the slopes of Signal Hill! The Bo-Kaap used to go by the name of ‘Malay Quarter’, and the unique style of houses is still vibrant as ever. By the way, did you know the area is one of the most photographed sites in Cape Town? Locals told me that the Bo-Kaap is a favourite location for film shoots due to its ‘romantic’ and picturesque character.

The History Behind the Colourful Bo-Kaap

Considered the historic centre of Cape Malay or Cape Muslim culture, the Bo-Kaap has a very rich history. Many of the current residents of Bo-Kaap are descendents of slaves. They were a diverse group, coming from Africa, India, Sri Lanka, Indonesia, Java Malaysia and other parts of Asia. They were forcefully brought to the Cape by the Dutch during the 16th and 17th centuries. The reference to Malay culture can be misleading, as only a small percentage of these people hailed from Malaysia. Nowadays, the area is home to about thousands of residents of whom about 90% are Muslim.

I also briefly visited the Bo-Kaap Museum (pictured). The Museum dates back to 1978. It established itself as a satellite of the SA Cultural History Museum, aiming to ‘showcase local Islamic culture and heritage’. Though small, I enjoyed my visit to the museum. The information about creole traditions like carnival (Kaapse Klopse), celebrated on the 2nd of January, was especially interesting. Historically, slaves would get a day off after the 1st of January to celebrate New Years in their own tradition. The wonderful museum guide gave me a one-on-one tour of the museum!

Meeting the Residents of the Bo-Kaap

Whilst I was walking around and taking pictures, this boy came up to me and asked if it was my own camera I was holding. I replied yes, so he asked if I could take a photo of him. As you can see, I agreed and the result is this photo. After we chatted for a while, he politely asked if I was now inclined to give him my camera. Unfortunately, I figured I had to say no if I wanted to take more pictures of my adventures in South Africa. But thankfully, he left equally as cheery as he had greeted me before!

Longmarket Street is one of the major streets in Bo-Kaap. The mint-coloured Boorhaanol Mosque on the left (thebuilding with the star and crescent on top of the minaret) is a noticeable feature. This is the only mosque in Cape Town that is an official national monument. It was first built in 1884 and was originally known as Pilgrim Mosque.

ALSO READ  The Story Behind Cape Point: The Legendary Cape of Storms

Why are the Bo-Kaap Houses so Colourful?

The reason behind the colourful Bo-Kaap painted houses is not entirely clear. Some say it originates from the fact that slaves didn’t have the freedom to wear any colourful clothing [1]. The custom to brightly paint houses may have started during celebrations of the abolition of slavery in 1838, celebrating the freedom of finally being able to express oneself.

Others say it may have something to do with South-Africa’s reinvention as the ‘Rainbow Nation’, but many doubt this interpretation [2]. Alternatively, the colours have also been linked to the feast of Eid at the end of Ramadan. Muslim residents may have painted their houses in preparation for celebrations.

Is the Bo-Kaap worth visiting?

I visited the Bo-Kaap in July 2014, when I was staying in the country for a few weeks as a volunteer. If you find yourself in South Africa, it is just of those sights you have to see. Although I’ve heard it can be quite touristy, I thought it was genuinely interesting to visit the area.

When I was walking down the streets, there weren’t many (other) tourists at all. This probably had a lot to do with the fact that it was winter season (tourist low-season). I imagine the dreary weather didn’t exactly help either. In fact, it seemed like I was the only one and several guards came up to me asking what on earth I was doing walking around the city all alone.

While I was travelling in South Africa alone, I may have felt unsafe a couple of times, but I certainly not when I was walking around the colourful Bo-Kaap. Of course you always need to remain alert. Still, the people I talked to were very friendly, especially the museum guide and the little boy I ran into. Good memories!

More from me about Cape Town: