After reaching the massive cliffs at Cabo Espichel, we climb into a jeep that will take us closer to the dinosaur tracks of Setúbal, Portugal. The driver tells us the buckle up, since it’s going to be a rough ride. Thank god I’m not afraid of heights. The rugged little road along the edge doesn’t leave much room for mistakes. Once we get there, we climb down the cliffs onto a tilted plateau. While trying not to slip and slide into the ocean, my feet slowly near the place where long-forgotten creatures unknowingly left their marks, millions and millions of years ago. I place my foot in one of the round indentations and struggle to understand how incredibly old the Earth really is. This is an encounter with deep time, I realise, and my endless curiosity for our planet is recharged. 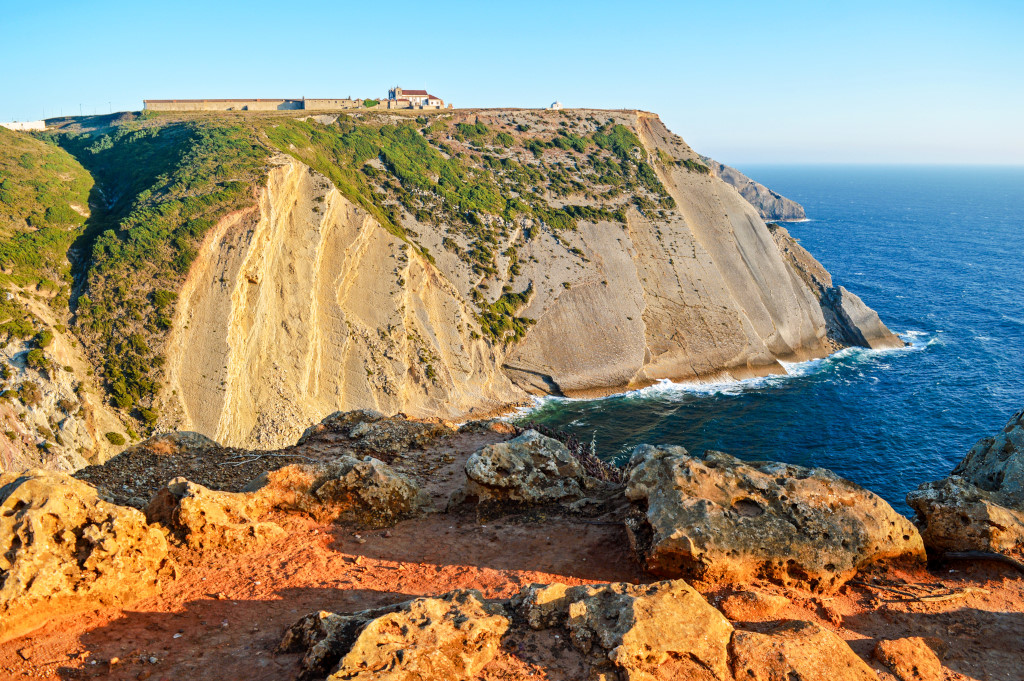 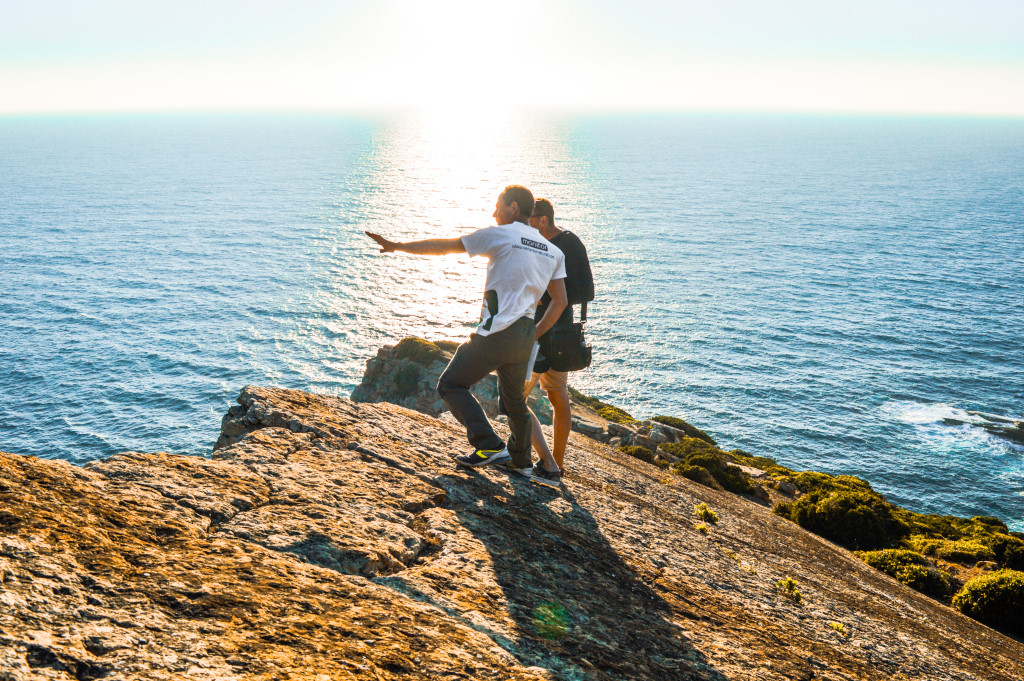 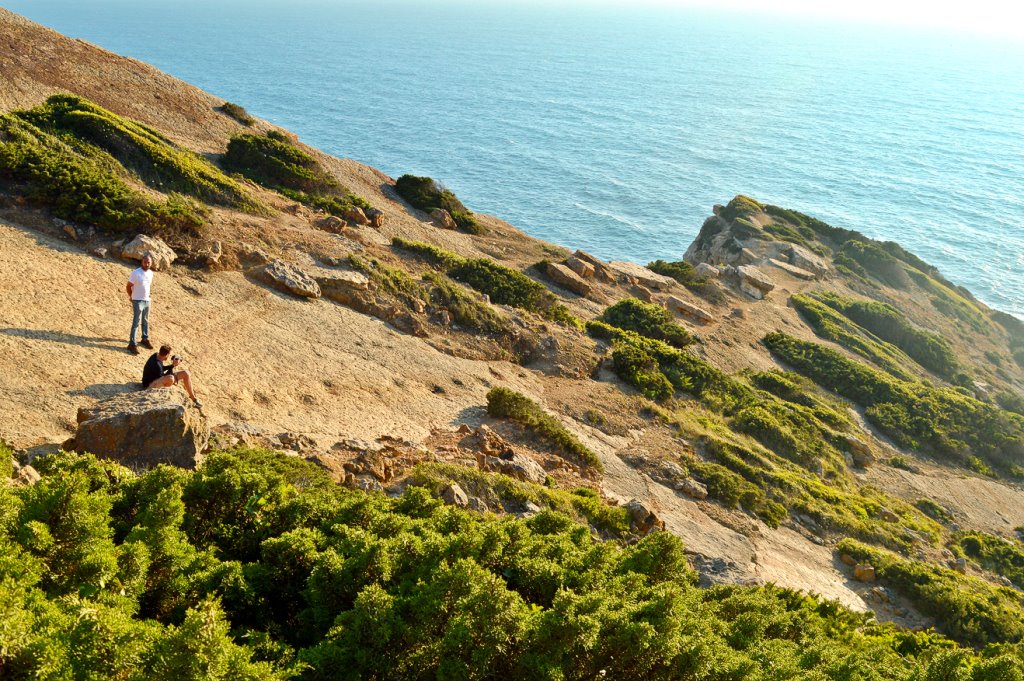 You’ll find Cabo Espichel on the Setúbal Peninsula, just underneath the Lisbon region. On several of the cliffs at Cabo Espichel, you can retrace dinosaur tracks from the Upper Jurrasic and Lower Cretaceous. Lisbon is far from a ‘hidden hotspot’ nowadays. But surprisingly, the majority of tourists doesn’t seem to know about Cabo Espichel (for now). Maybe that’s a good thing, but I will tell you this: if you’re a fellow history nerd and like a little taste of adventure, you’ll want to see this unique piece of European geoheritage for your own eyes.

Nowadays, the coast of Setúbal is made up of rugged cliffs that look out onto the vast Atlantic Ocean. This, however, wasn’t always the case. Millions of years ago, present-day Portugal must have looked unrecognisable. If we rewind millennia of geological transformation, almost nothing remains the same. There are no cliffs, but there are ancient creatures following their paths across soft and marshy wetland. Some of them are alone, while others are travelling in groups.

If we rewind millennia of geological transformation, almost nothing remains the same. There are no cliffs, but there are ancient creatures following their paths across soft and marshy wetland.

Later, their footsteps disappear underneath a new layer of sediment and water. It would be a very long time before they were seen again. Millions of years passed and the tectonic activity underneath the Earth’s crust started to lift and tilt the former wetland until they finally became massive, nearly vertical cliffs. After years and years of erosion, layers of soil and rock slowly disappeared. This is how the footsteps finally revealed themselves once again, on the side of the cliffs. 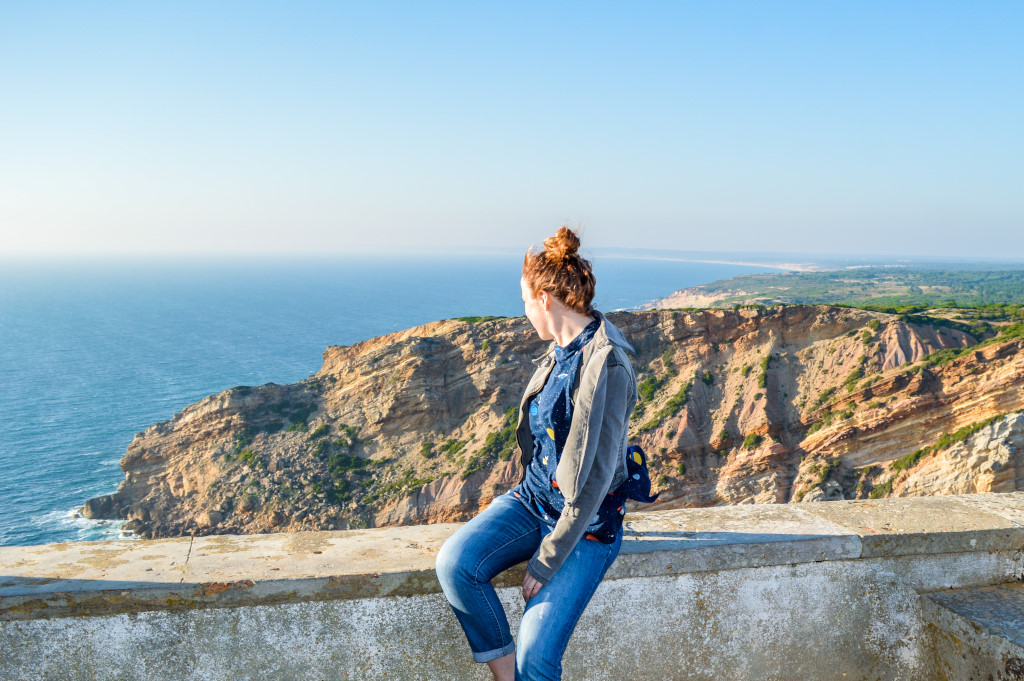 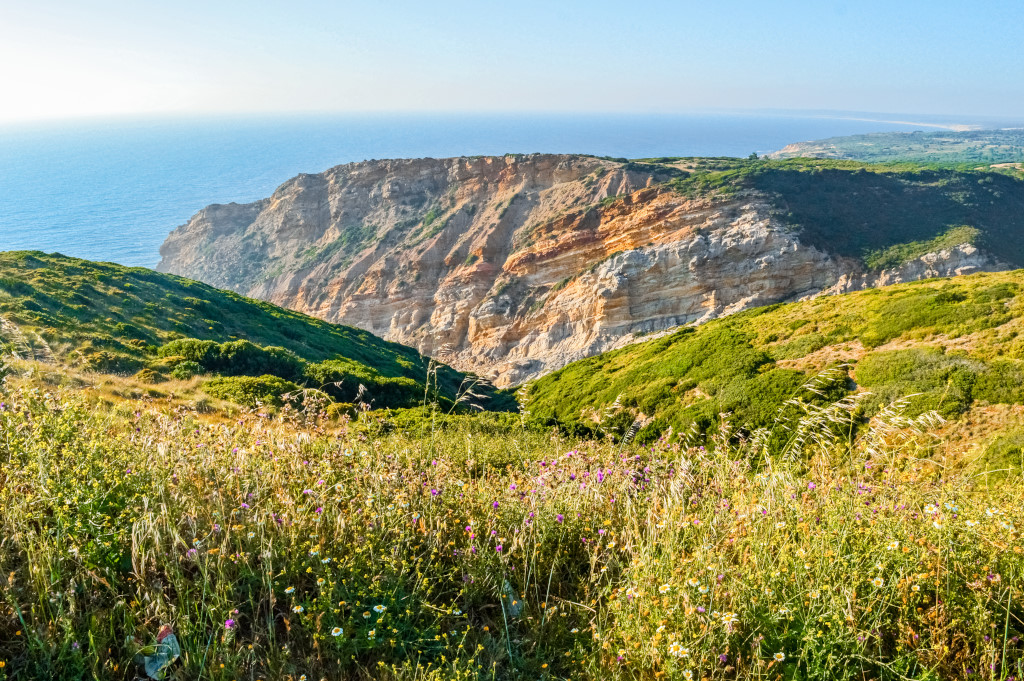 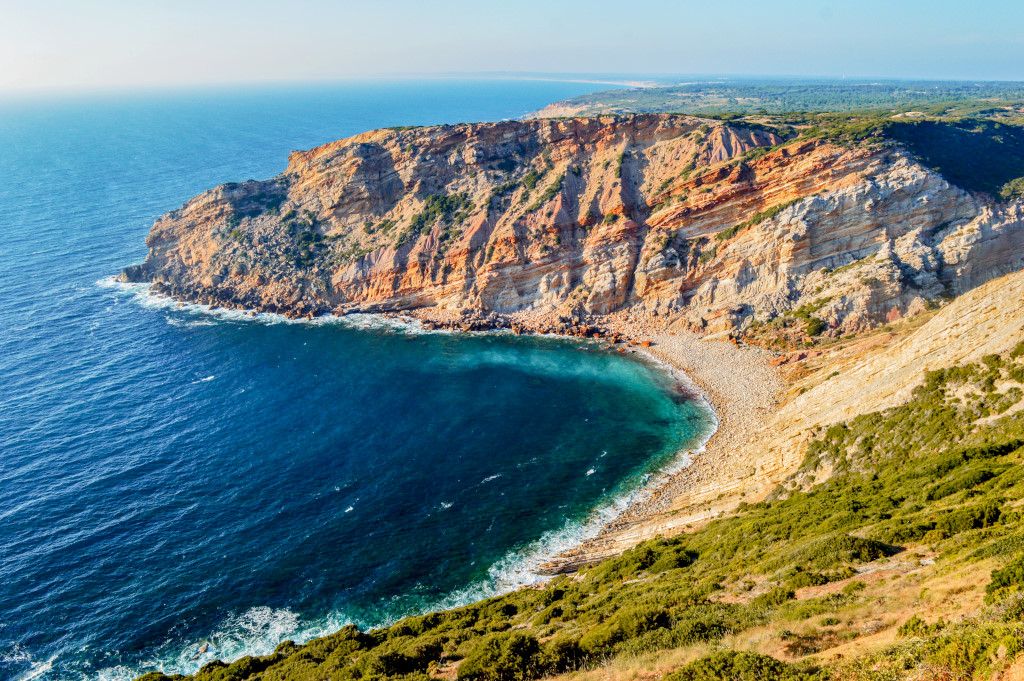 What Species of Dinosaurs Lived in Portugal?

There are at least 10 different dinosaur tracks at Cabo Espichel alone, and they belong to a variety of species. The Pedra da Mua tracksite includes Sauropod and Theropod footsteps from the upper Jurassic. Sauropods were plant-eating dinosaurs with extremely long necks. They could grow up to 39 metres in length, making them the largest animals to ever live on land. Theropods were bipedal carnivores with really short arms and sharp teeth (like the T-rex). This group of dinosaurs is the ancient ancestor of all modern-day bird species. There were at least two groups of sauropod dinosaurs at Cabo Espichel: a group of seven juvenile animals and, much later, a group of three adult dinosaurs. One of the tracks even revealed that one of the sauropods must have been limping.

Sauropods were plant-eating dinosaurs with extremely long necks. They could grow up to 39 metres in length, making them the largest animals to ever live on land.

The other tracksite at Cabo Espichel is called Lagosteiros. This is the site where we descended the cliff. The clearly preserved line of footsteps at Lagosteiros belonged to a herbivorous Ornithopod. This dinosaur never met the dinosaurs at Pedra da Mua, since it lived in the Lower Cretaceous; about 50 million years after the Upper Jurassic. Can you imagine? Numbers like that always remind me how the human species is still so young. Perhaps we still have a lot of evolving to do, as long as we manage not to wipe ourselves out. 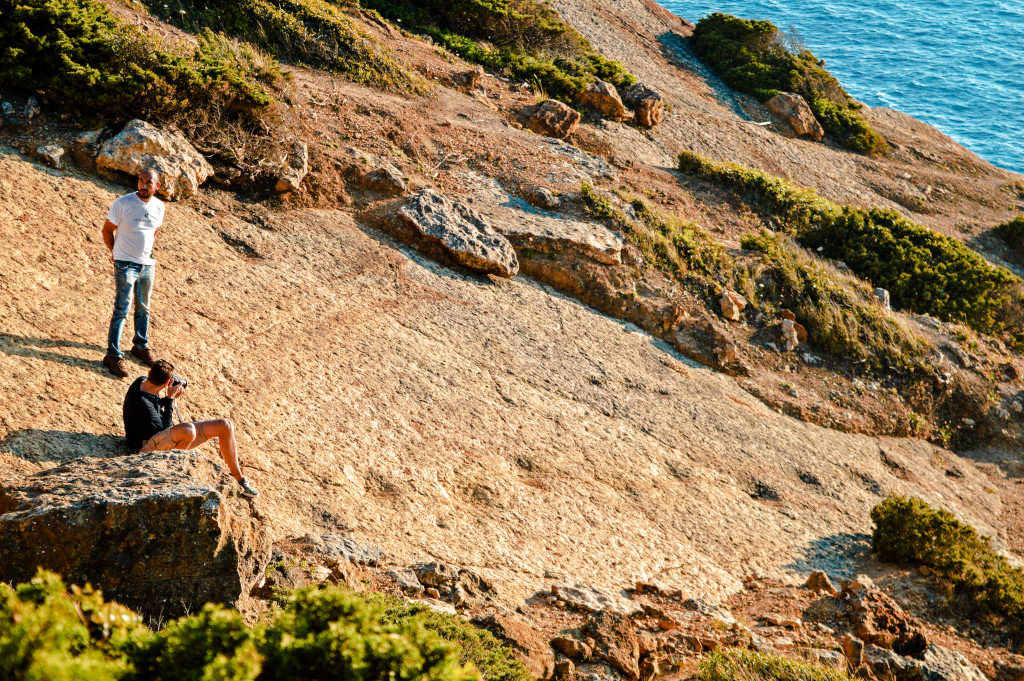 The Legend of the Giant Mule and Virgin Mary

The fascinating tracks from the long gone dinosaurs at Cabo Espichel are actually not the only attraction. On top of the cliffs, you will also find the church and sanctuary of Nossa Senhora do Cabo. Surprisingly, the dinosaur tracks and sanctuary are more closely linked than you might suspect. Back in medieval times, we hadn’t yet figured out what dinosaurs were. This was mostly because we still thought the Earth was only a few thousand years old. Instead, the locals interpreted the dinosaur tracks as a religious miracle: traces from a giant mule that climbed the cliff, carrying virgin Mary to the top.

In the Middle Ages, locals interpreted the dinosaur tracks as a religious miracle: traces from a giant mule that climbed the cliff, carrying virgin Mary to the top.

Of course, now we know that there was no climbing involved and this giant mule was actually a hefty dinosaur. Nonetheless, this legendary miracle inspired the locals to build a church and sanctuary that still remain at the cape. The sanctuary became a beloved place of pilgrimage, already attracting many travelers in the 14th, 15th, and 16th centuries. 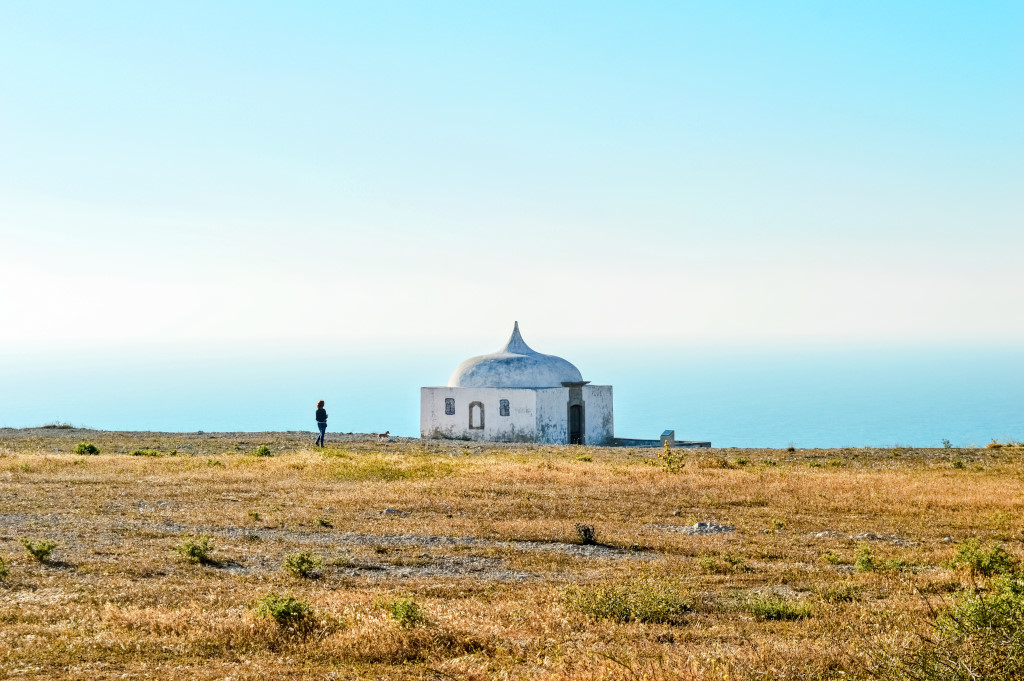 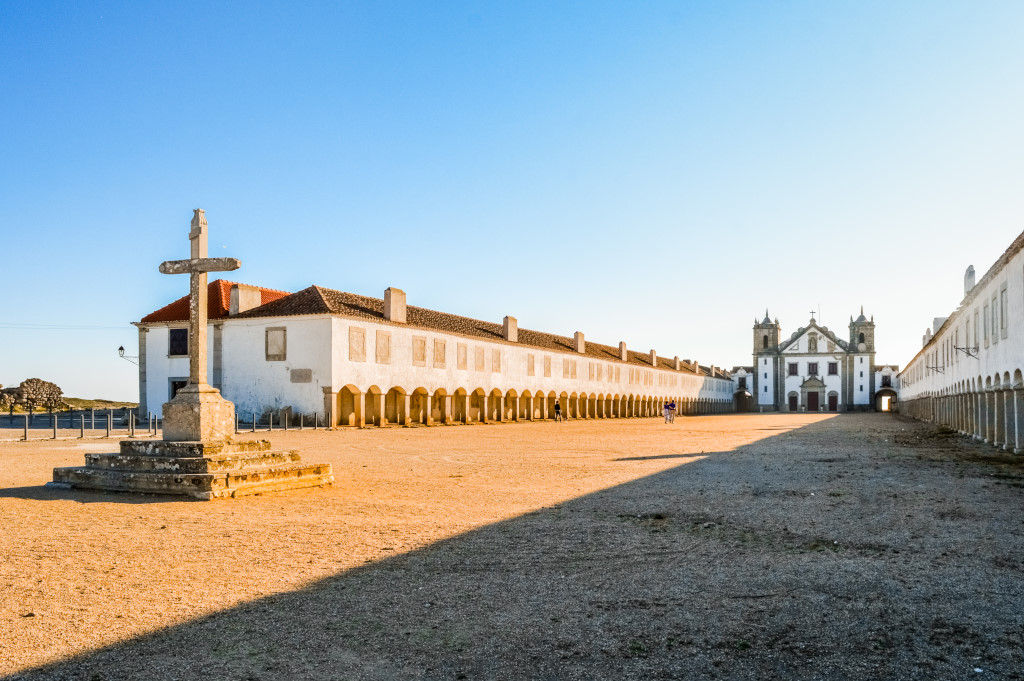 Where to Find the Tracks Left by Dinosaurs at Cabo Espichel

Keep in mind that some of the tracks are difficult to spot with an untrained eye. If you’re interested in learning more about Cabo Espichel’s prehistoric history, I recommend booking a guide from Vertente Natural. They are experts on the area’s terrain and can join you on your hike. Alternatively, if you don’t have a lot of time to go hiking (or have difficulty walking) they can take you on a ride in their jeep, like I did. 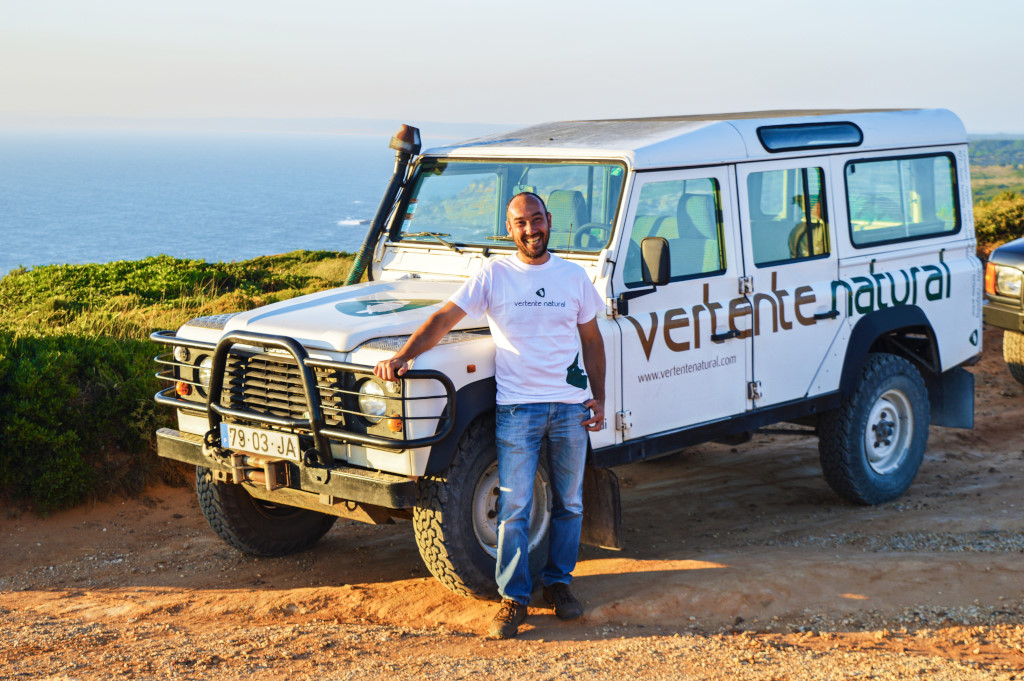 The best thing about Cabo Espichel is that it’s close to Lisbon. Combining a city trip to Lisbon with a day trip to Setúbal is very easy. You can enjoy the food and architecture in the capital, while also exploring natural landscapes and learning about prehistoric Portugal. The easiest mode of transport would be to rent a car. It usually takes less than two hours to reach Cabo Espichel from central Lisbon.

If renting a car is not a good option, you can also take public transport. Take the TST (Transportes Sul do Tejo) bus from Praça de Espanha in Lisbon (number 207 or 260) to Sesimbra. In Sesimbra, you can take bus 201 or 205 and get off at the stop at Cabo Espichel. This journey should also take you about two hours or less.

I wrote this article in collaboration with Turismo de Lisboa and TAP Portugal, thank you for the invite for this amazing trip! As always, I retain full editorial control of all my articles. Curious about the region? Visit VisitLisboa to find more information. 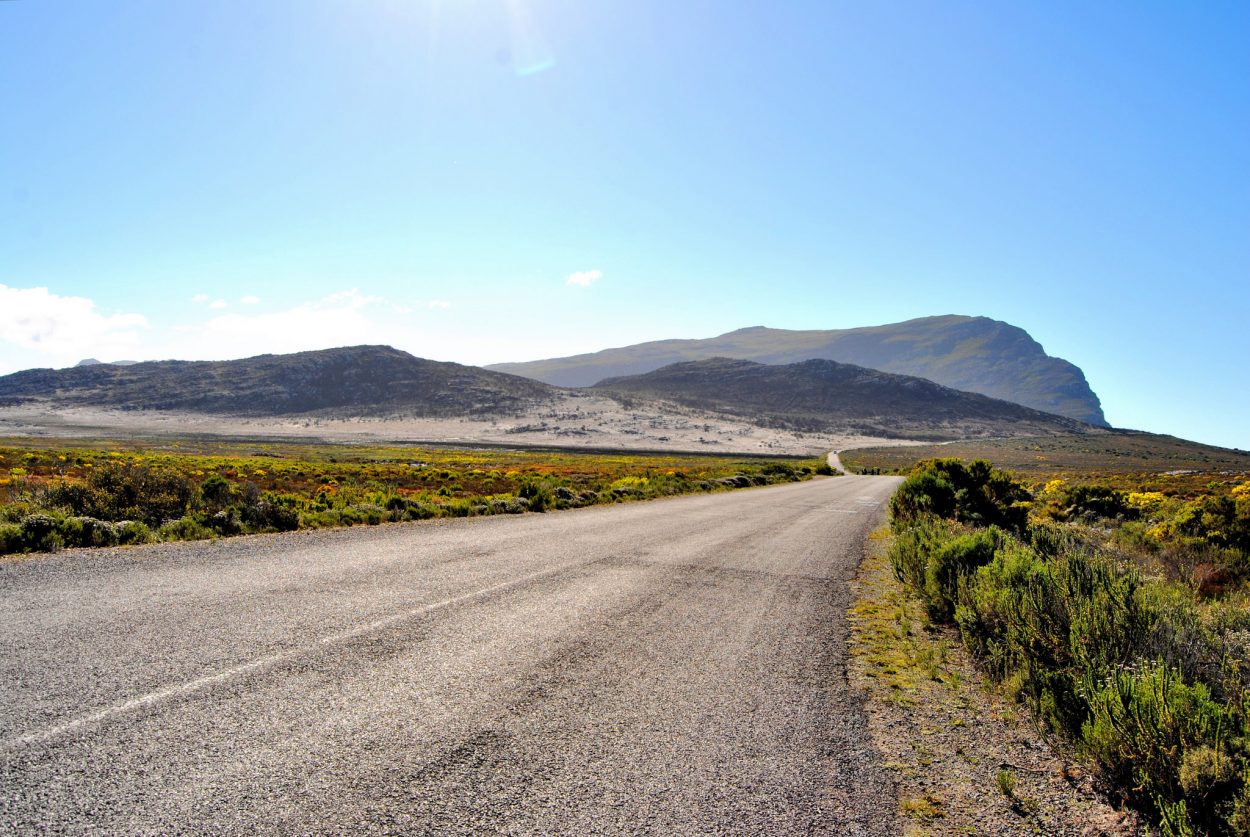