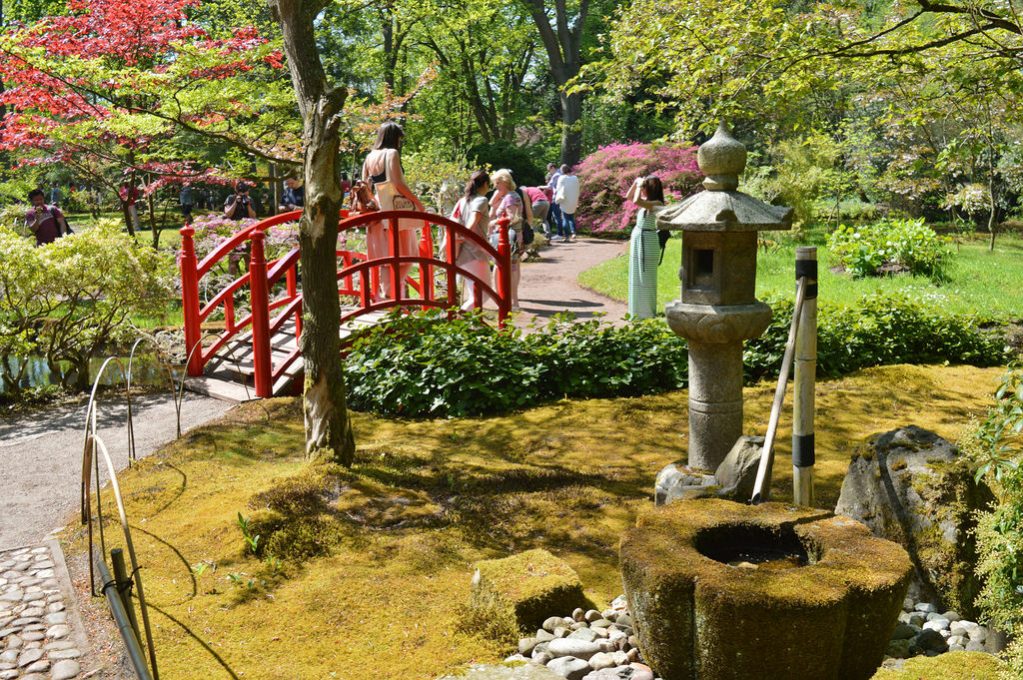 Celebrate Spring at the Japanese Garden in The Hague

I open the gate that leads toward the garden, and the red bridges, purple leaves, and solid stone lanterns surround me. A perfectly geometric pavilion invites me to sit and enjoy the beauty of the spring season. As I rest and absorb the scenery, I become more and more convinced: the Japanese Garden in The Hague might just be the most enchanting place in Holland.

The Beauty of the Japanese Garden in The Hague

The Den Haag Japanese Garden: A little piece of Japan in Holland

It was even more enchanting than I had expected. Even the moss on the forest floor seemed to be a different species than the one I usually see in the Netherlands. The garden has to be in my personal top 10 of most beautiful places in the Netherlands.

The History: Lady Daisy and her Japanese Adventures

Lady Daisy passed away in 1939 and the garden became a national monument in 2001. The pavilion was renovated in 2008, as the thatched roof was aging and the sliding panels needed to be replaced (they were lost in World War II). The garden celebrated its 100th anniversary with a festival in April 2013.

Because so many of the plants and trees in the garden are exceptionally delicate, the garden is only open for about 8 weeks every year. The garden opens for 6 weeks in spring and 2 weeks in autumn. For the 2019 spring season, the garden will be open to the public from April 27 until June 9. In spring, the garden is open everyday from 9:00 to 20:00. It will reopen for the autumn season on October 12, 2019. The gates will be open everyday from 10:00 to 16:00 until they close again on October 27. Well, I have already written the dates in my diary. I really can’t wait to see the garden in a different seasonal colour palette as well!

How to get to the Japanese Garden in The Hague

If you are ever in the area at the right time, you definitely can’t skip out. The garden is located within the Clingendael Park (Landgoed Clingendael). The easiest way to get to the garden by public transport is to take the train to Den Haag Centraal (The Hague Central). After you get off at Den Haag Centraal, you can choose to walk to the Clingendael Park, passing through the Haagse Bos (Forest of The Hague). This will take you about 30-40 minutes. Alternatively, you can take bus 23 to either ‘Wassenaarsweg (Oost)’ or ‘Ruychrocklaan’, or bus 18 (final stop).

More About Spending Spring In The Netherlands: