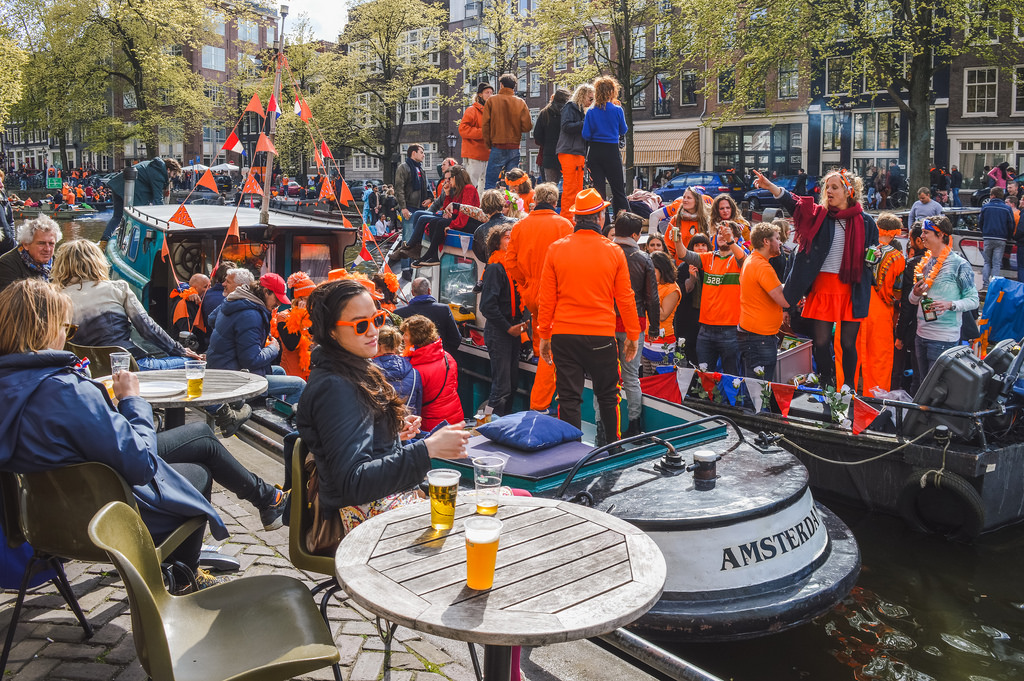 The Essential Guide to King’s Day in Amsterdam

Once every year, the entire country of the Netherlands transforms into the biggest orange-themed street party you’ve ever seen. I’m talking about King’s Day, of course, the birthday of the current Dutch monarch King Willem Alexander. If you didn’t grow up in the Netherlands, however, all of this may not seem so super straight-forward as I’m making it seen. But don’t panic, I’ll tell you the most important things to know before you join the crowds. And don’t be mistaken, those crowds are no joke, especially in the Dutch capital. Up to a million extra people will be visiting Amsterdam, which only has a population of about 850,000 locals. In order to tackle the orange madness fully prepared, check out this essential guide to King’s Day in Amsterdam!

Orange Madness for Beginners: A Guide to King’s Day in Amsterdam

The very first King’s Day was actually called Queen’s Day (Koninginnedag). The initial royal celebrations can be traced back to 1885, when Princess Wilhelmina turned 5 years old. She was the heir to the throne, so the first celebration was Princess’s Day. It transformed into a national holiday, Queen’s Day, when Wilhelmina became Queen of the Netherlands in 1890.

Wilhelmina’s daughter Juliana continued the tradition in 1949 and Queen’s Day was moved to April 30. Juliana’s daughter Beatrix did the same, but kept April 30 as the date (her own birthday is in January, too cold for outdoor festivities). Finally, Willem-Alexander ascended to the throne and Queen’s Day became King’s Day, now celebrated on April 27.

Yes, Everything and Everyone is Going Orange

In case you are still wondering why so many people will wear something orange for King’s Day, I’ll finally tell you why. The answer is actually incredibly simple: orange is the national colour of the Netherlands. The royal family’s last name is (partially) “Van Oranje”, which means “Of Orange.” Unsurprisingly, this colour has become the most iconic visual indicator to represent the country. Bakeries and typically Dutch stores like the HEMA will even sell orange tompouces, instead of the usual pink ones.

The most popular activity during King’s Day is the vrijmarkt (free market). There will literally be street markets in every village, town, and city in the Netherlands. We love getting things absolutely dirt cheap (greediness is in our DNA), and King’s Day is the ultimate opportunity to buy a ‘new’ table lamp for your office. It is the one day in the year where nobody needs a permit to sell their superfluous stuff.

In Amsterdam, you will find King’s Day markets in almost every neighborhood. The most famous spot is undoubtedly Vondelpark, the city centre’s largest public park. Most of the vendors and performers there will be kids, since the park is a designated market area for children. Other market hotpots in Amsterdam will be the West (Jordaan) and Zuid neighborhoods.

Now, if you’re less into finding good deals on the street (not the drug kind please, the flea market kind), you might want to focus more on the party zone. Like I said, King’s Day is basically the biggest annual party in the Netherlands. The historic canal belt (central Amsterdam) will be overflowing with ecstatic locals and tourists dancing and drinking beer.

Major party hotpots (with crazy crowds) will be the areas Rembrandtplein and the Jordaan. For the most part however, anywhere near the major canals will be filled to the brim with people. By the way, the party actually starts on King’s Night, the night before King’s Day. Just head to any café in these areas and you’ll be set for the evening.

Now that you’ve been educated about the basics of King’s Day, it is super important to keep these practical tips in mind before you plan your day:

More From Me About Amsterdam: