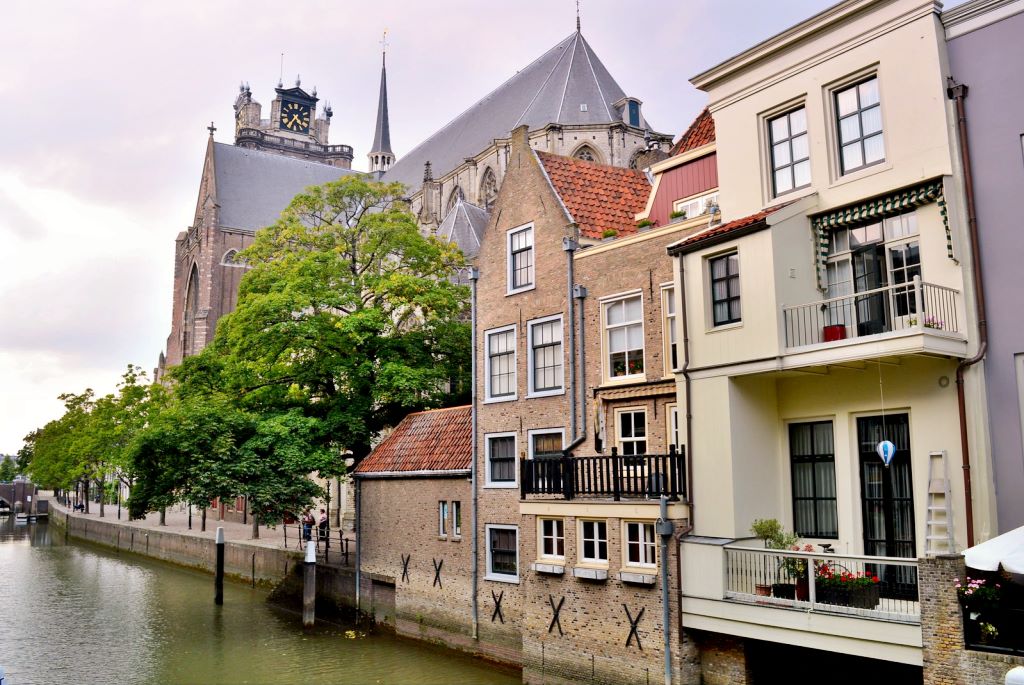 One Day in Dordrecht: Oldest City in Holland

When I say Holland, you will probably think of Amsterdam. Some of you might also know about Rotterdam or The Hague, but let’s face it: most won’t really know about the rest of the Netherlands. It’s a shame really, because there are a ton of lovely smaller cities across the country. One of those lovely cities is Dordrecht: the oldest city in Holland and a true historic gem. With its many canals, picturesque streets and charming inner city port, this Dutch city certainly deserves a spot on your bucket list. Allow me to tell you why.

Exploring the Historic Streets and Canals of Dordrecht: Oldest City in Holland

The Beginnings of Dordrecht Island

Dordrecht, also nicknamed ‘Dordt’, has a rich cultural history and is technically the oldest city in Holland (meaning the oldest city within the modern-day provinces of North-Holland and South-Holland). First mention of the town stems from 1120 and Dordrecht officially claimed city rights in 1220. You can find over 950 monuments, 7 churches, and 6 museums in the medieval city center alone. The city was built on the Dordrecht Island (Het Eiland van Dordt). Interestingly, the city wasn’t an island from the very beginning. Dordrecht became an island after the disastrous Saint Elisabeth flood of November 1421.

The island of Dordrecht is also known for its beautiful network of old canals. In fact, the name ‘Dordrecht’ most likely originates from an older Dutch word meaning ‘thoroughfare’ (Thuredrecht). Some argue this word stems from the city’s history as a major European trade port, where ‘thoroughfare’* refers to the canals where ships used to sail through. The ships needed to pass through the canals to get from one river to another. When I was exploring the center of town and crossing countless of quaint little bridges, Dordrecht even reminded me a little bit of a Dutchified Venice! Just ducks though, no gondoliers.

What I especially liked about Dordrecht is that there seemed to be hidden animals everywhere! Not real ones, unfortunately, except for the pigeons and dogs. But I noticed there were countless of cool statues and cute store signs hanging from the renaissance style Dordtse gevels (Dordtian facades). Lions, swans, cows, elephants…you name it. Those interesting-looking door knockers, for instance, can be found throughout the old town. That roaring lion statue is part of the Dordrecht city hall, a major monument in town.

ALSO READ  Amsterdam on Pause: Photos of the City in the Coronavirus Era

Take a Moment for Monuments like Dordrecht City Hall

Naturally, since Dordrecht is the oldest city in Holland, it would be a shame to skip the monuments. One of the most important buildings in Dordrecht is the city hall on Stadhuisplein from 1383. It is now a renaissance building in neoclassic style with large columns and impressive lion statues. The building was initially a cloth hall, but later became a city hall in 1544. The neoclassic decorations are from late medieval period, inspired by new architectural trends in Amsterdam. The city hall continues to be the seat of the seat of the city’s government and it is a popular place for weddings.

Grote Kerk: A must-see for your Dordrecht City Trip

The Grote Kerk, officially the Onze-Lieve-Vrouwe-Kerk (‘Our Dear Lady Church’), belongs to the Dutch Top 100 of UNESCO monuments and is probably the most iconic building in Dordrecht.

The church was constructed between 1285 and 1470 and has a 65 m tower with 67 bells. The heaviest bell weighs 9830 kilos, which even makes it the heaviest bell in the Netherlands. If you pay close attention, you may notice that the tower is slightly crooked. Just like the Tower of Pisa, this crookedness is the result of the soft and swampy soil underneath the building.

Visiting Dordrecht For One Day

I visited Dordrecht on a pleasant summer’s day in August earlier this year. I knew that Dordrecht had always been a beautiful city. Still, I was surprised by the appeal of the pretty canals and adorable rows of historic little houses. If I were to describe Dordrecht in two words, it would be “delightfully charming”.

If you ever decide to take a trip to Holland, you definitely shouldn’t miss out on a visit to Dordrecht. One day should be enough to get a taste of this historic city. A weekend would be even better, if you have the time. And if you’re planning to spend more time in the Netherlands, Dordrecht is great to combine with visits to nearby cities like Rotterdam and Breda. You can easily reach Dordrecht via public transport, usually most conveniently by train. Check out my other articles for inspiration and information about the Netherlands here.

14 thoughts on “One Day in Dordrecht: Oldest City in Holland”