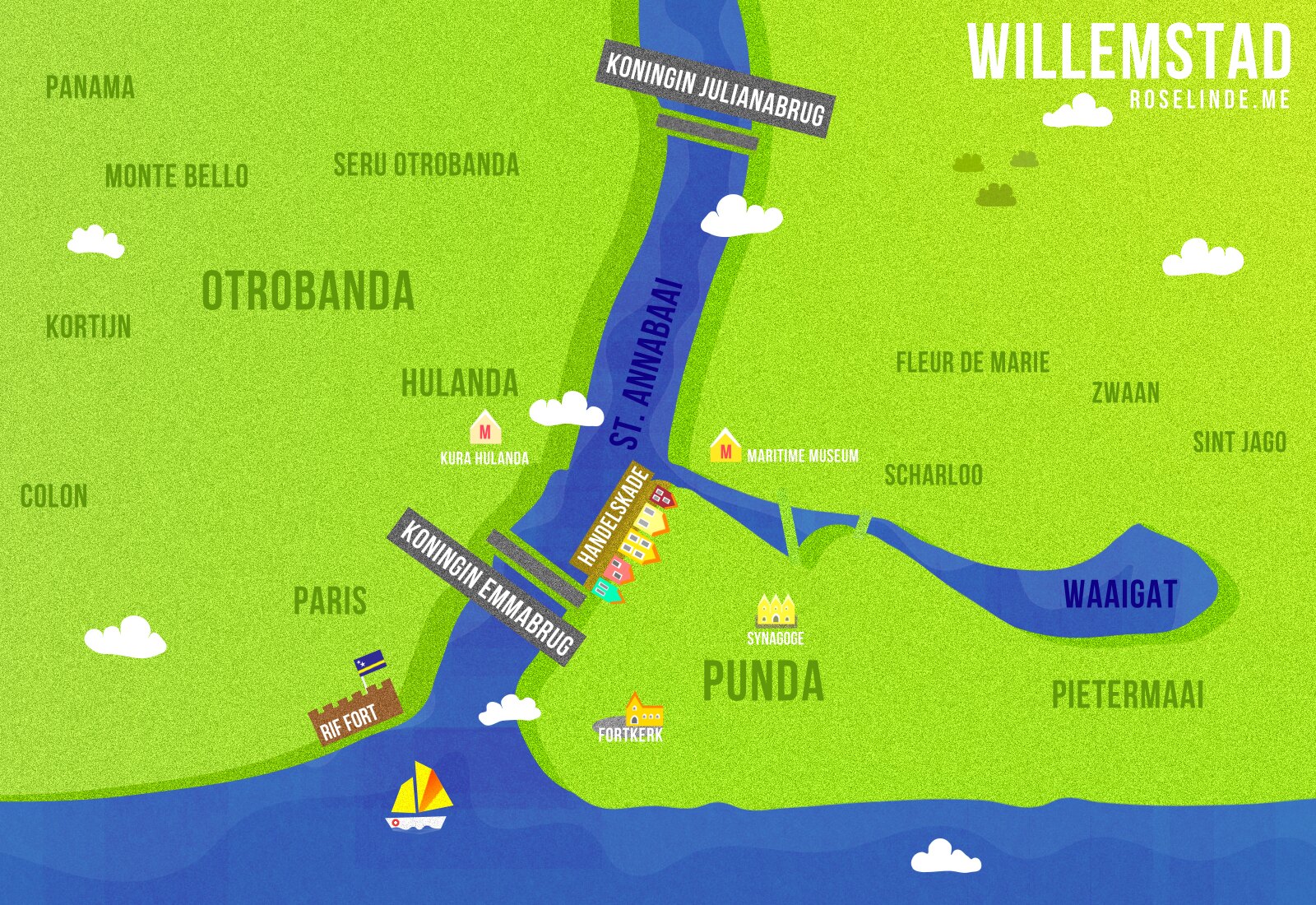 Way back in the summer of 2009, my family and I were on cultural exploration on the island of Curaçao. We’re not actually very good at lying down on beaches, especially when temperatures reach about 35 degrees Celsius everyday. I usually acquire the hugely attractive hue of a very ripe tomato. Instead, we visited almost every museum and cultural hotspot on the island.

Curaçao has a very interesting colonial history, especially in relation to previous Dutch rule and intertwined atlantic slave trade. Many plantation manors and kunuku houses (former slave cottages, which I will post more about soon) remain as traces of a complicated past. Today, I will be blogging about some of the main spots of the island’s capital: Willemstad. Check my little city map for reference! 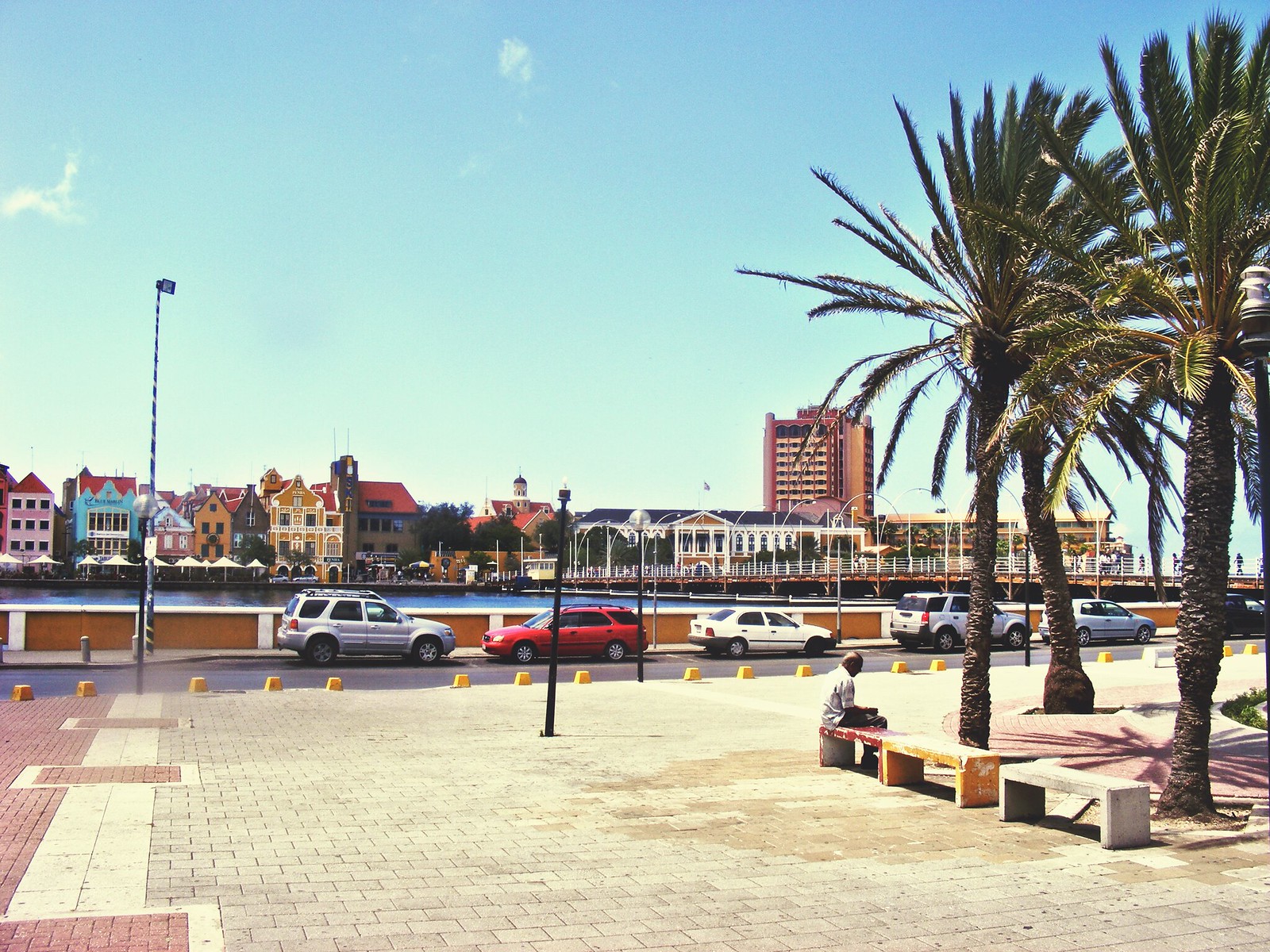 This photo was taken from Brionplein (Brion Square), near the “Paris” neighbourhood (Otrobanda side) as indicated on the city map. The colourful European-looking houses across the water (especially on the left), built in colonial Dutch architectural style, form the famous “Handelskade” (literally “Trade Wharf”). It is an iconic sight of Willemstad and probably the most frequently photographed part of the island. 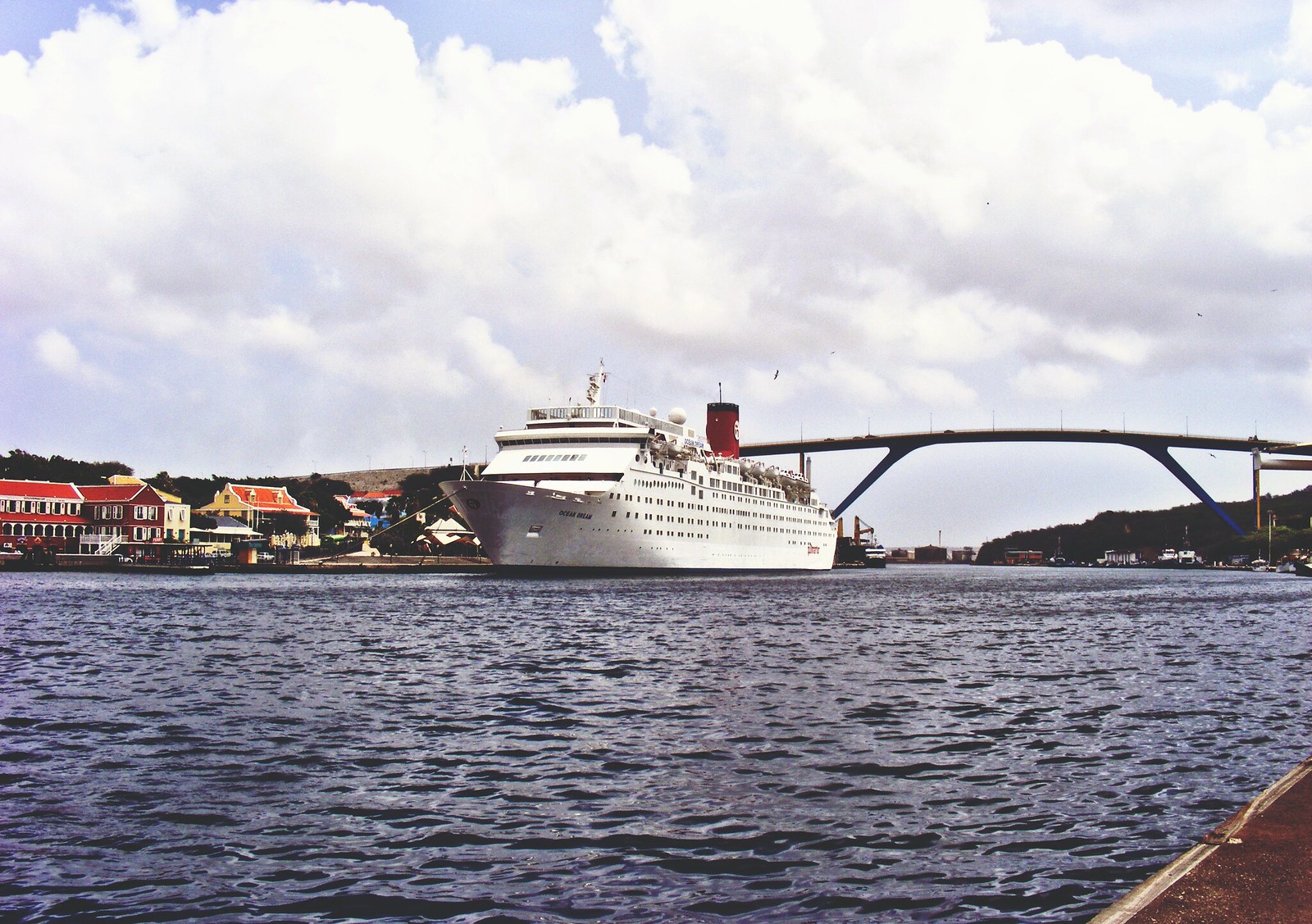 This large passenger ship (presumptuously called the “Ocean Dream”) was docked in the St. Annabaai (St. Anna Bay), just past the Koningin Julianabrug (Queen Juliana Bridge), which you can find in this photo’s background. Vessels like these aren’t a particularly rare sight in Willemstad, Curaçao is a popular holiday destination (especially for Dutch people). 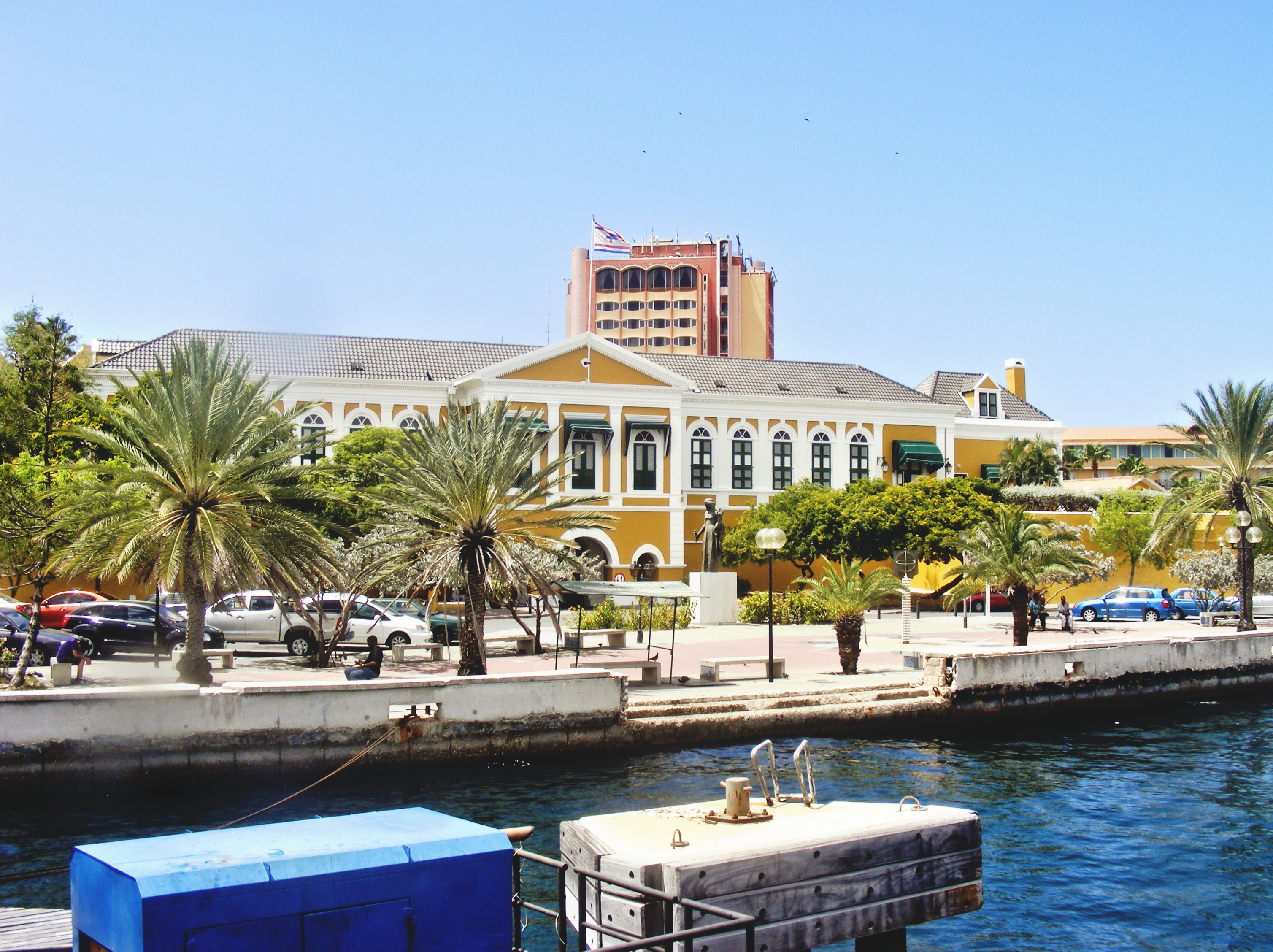 This historic building is actually Fort Amsterdam (1635-1636), located on the eastern “Punda” side of the island, next to the Handelskade. Previously serving as the biggest of all 8 forts on the island, Fort Amsterdam currently serves as the seat of the government of Curaçao. Inside the walls of the Fort Amsterdam is the well-known Fortkerk (Fort Church), which is part of the UNESCO list of world heritage sites. The church still holds services to this day and is now home to the Protestant Cultural Historical Museum. 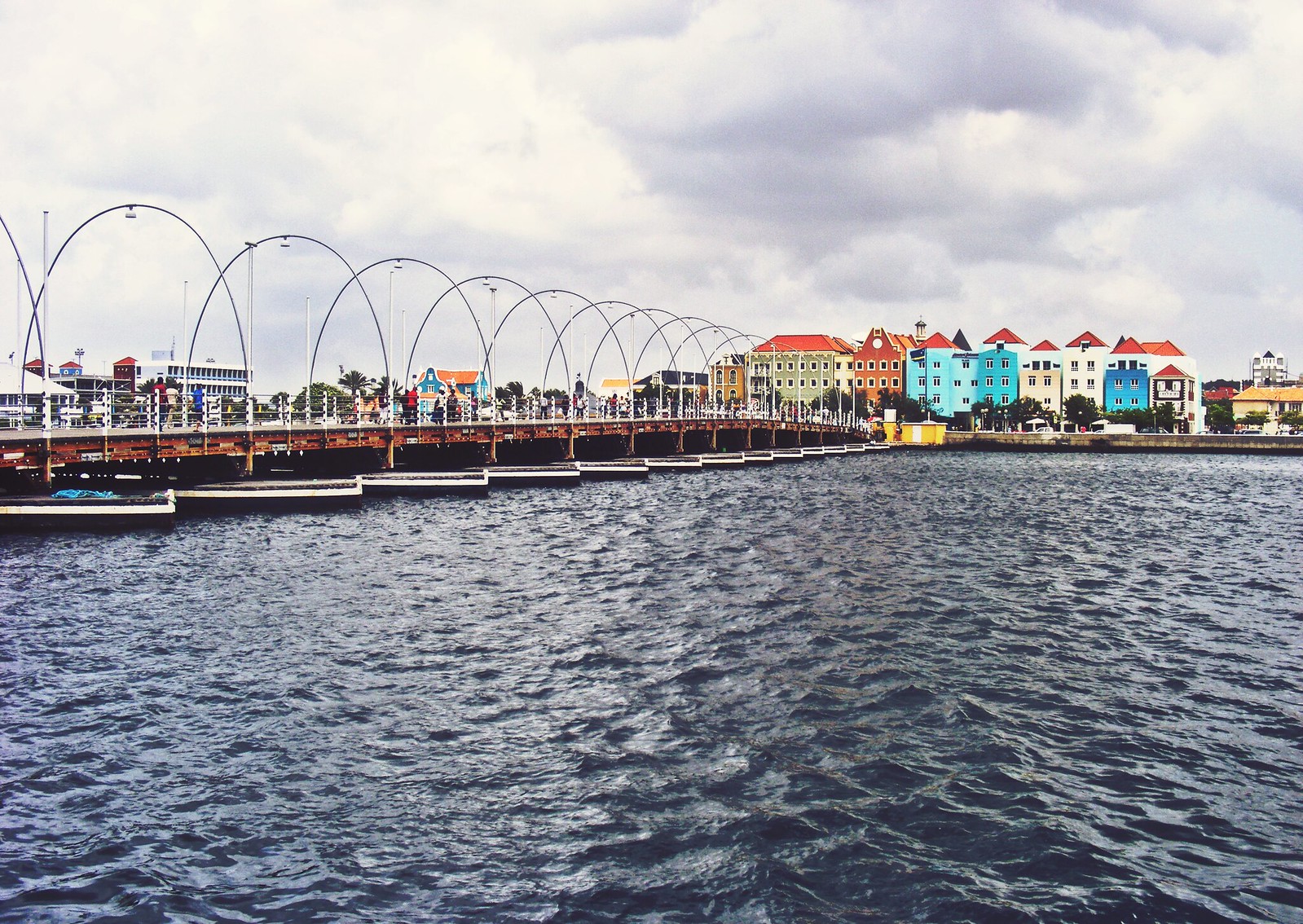 The Koningin Emmabrug (Queen Emma Bridge) is a pontoon bridge that connects Otrobanda and Punda. The 168 metres-long bridge is mostly used by pedestrians and is the only wooden floating swing bridge on Earth. The bridge opens regularly to let ships pass through into St. Annabaai, in which case pedestrians can cross to the other side using ferries. Built in 1888, the Koningin Emmabrug used to be a toll bridge. Originally, people that did not own any shoes were exempt from paying the fee. Nowadays, it’s completely free of charge! 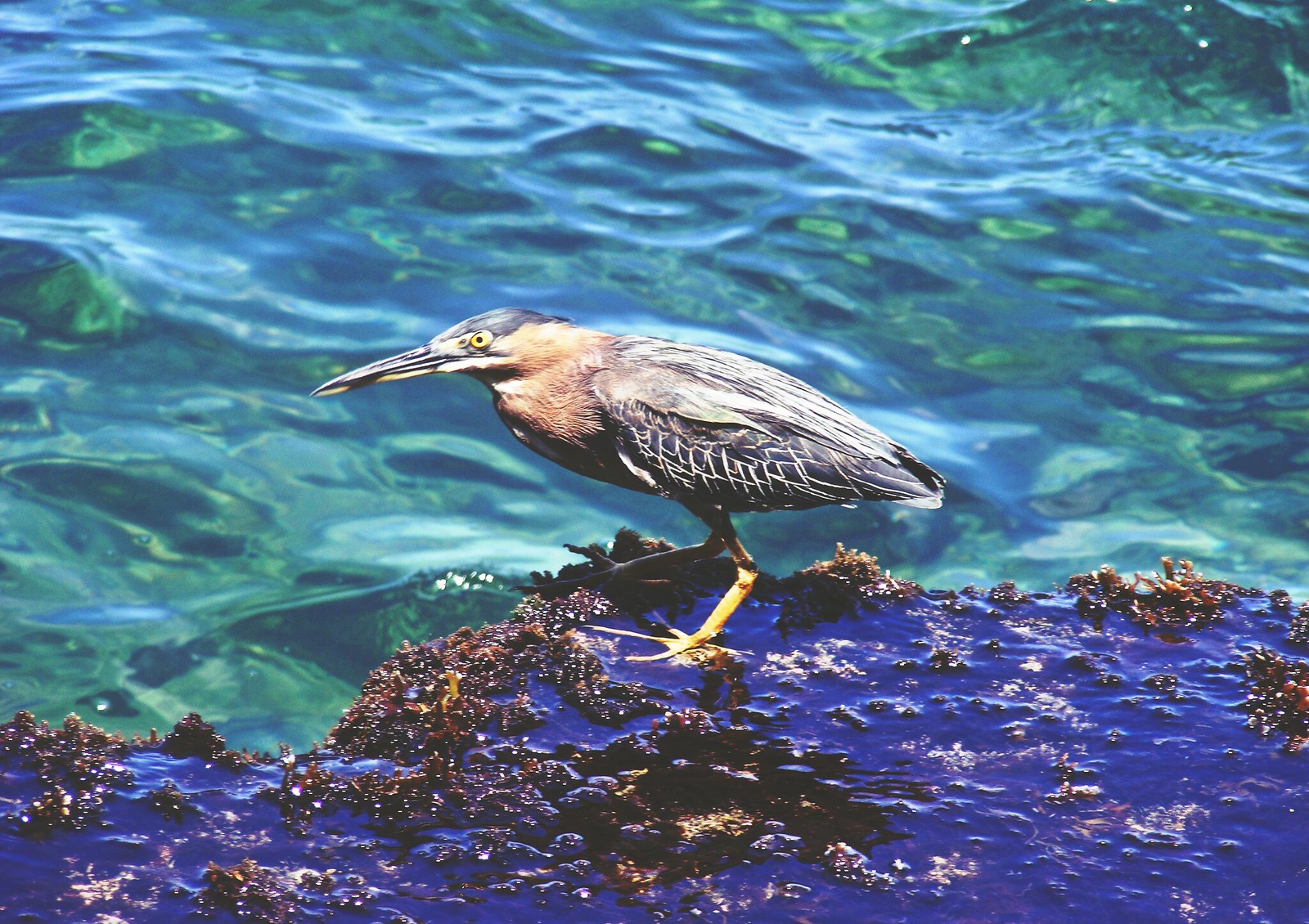 Here’s a travel tip: if you just feel like to strolling around the city and skipping the museums, you can easily reach the literal edges of the city. Head towards Rif Fort (“Reef Fort”, now also a mall, in case you feel an unstoppable urge to spend your money on way too expensive brands) or the outer edges of Punda past Fort Amsterdam and go have a look out onto the Carribean Sea, spot some incoming ships or take photos of unattractive birds.

What to do – Useful Websites: