Tiananmen Square; who hasn’t heard of it? I visited the Square while I was in China for the Beijing Normal University Summer School. We had been exploring the Forbidden City in the morning (directly north of Tiananmen Square) and decided we definitely couldn’t miss out on visiting this world-famous square either. Tiananmen Square is rightfully known for being one of the largest public city squares on Earth (it actually ranks fourth). The gigantic square has a surface area of 440.000 m2 (800 by 500 m) and allows for at least a million people to gather at one time. 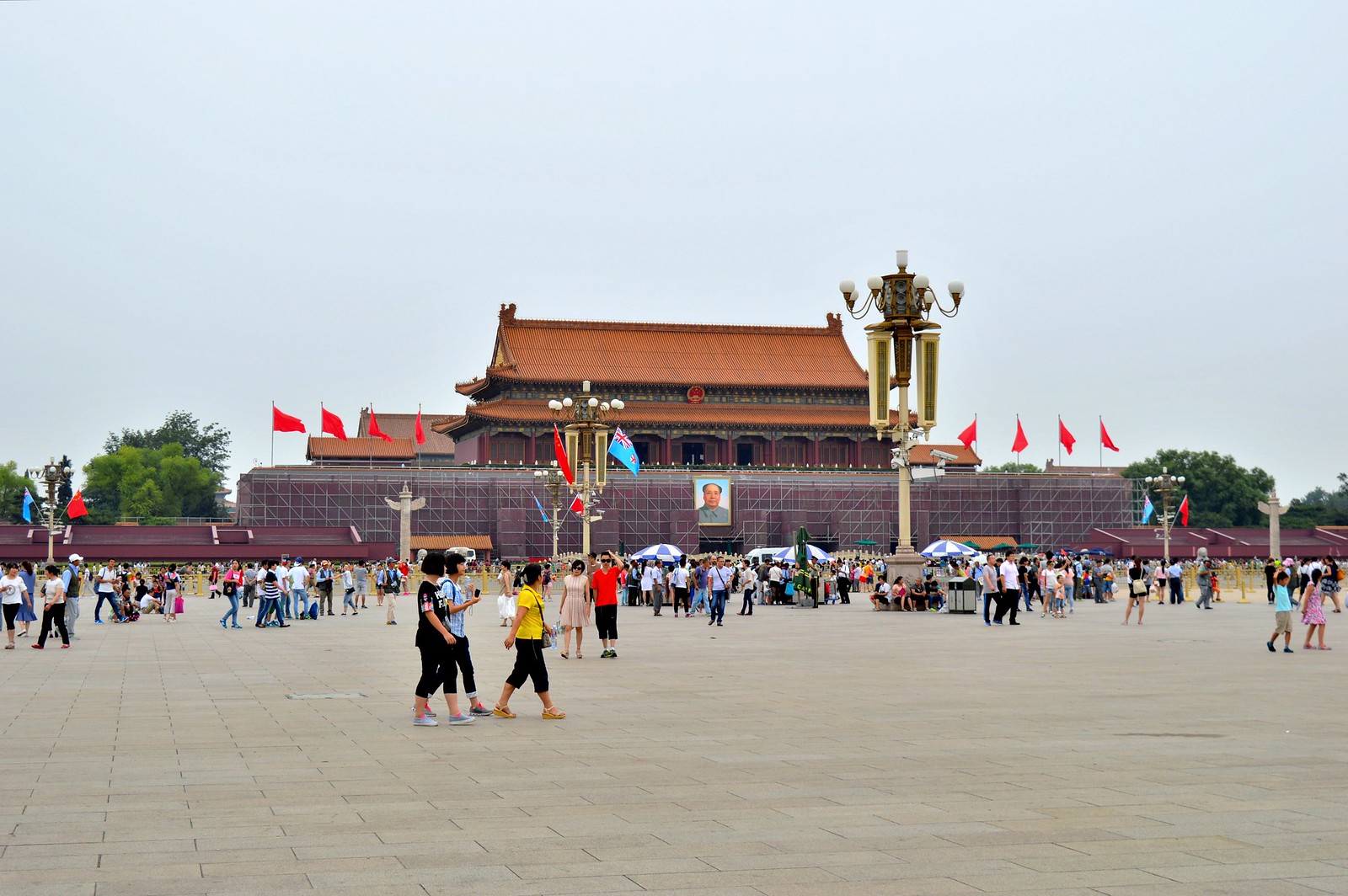 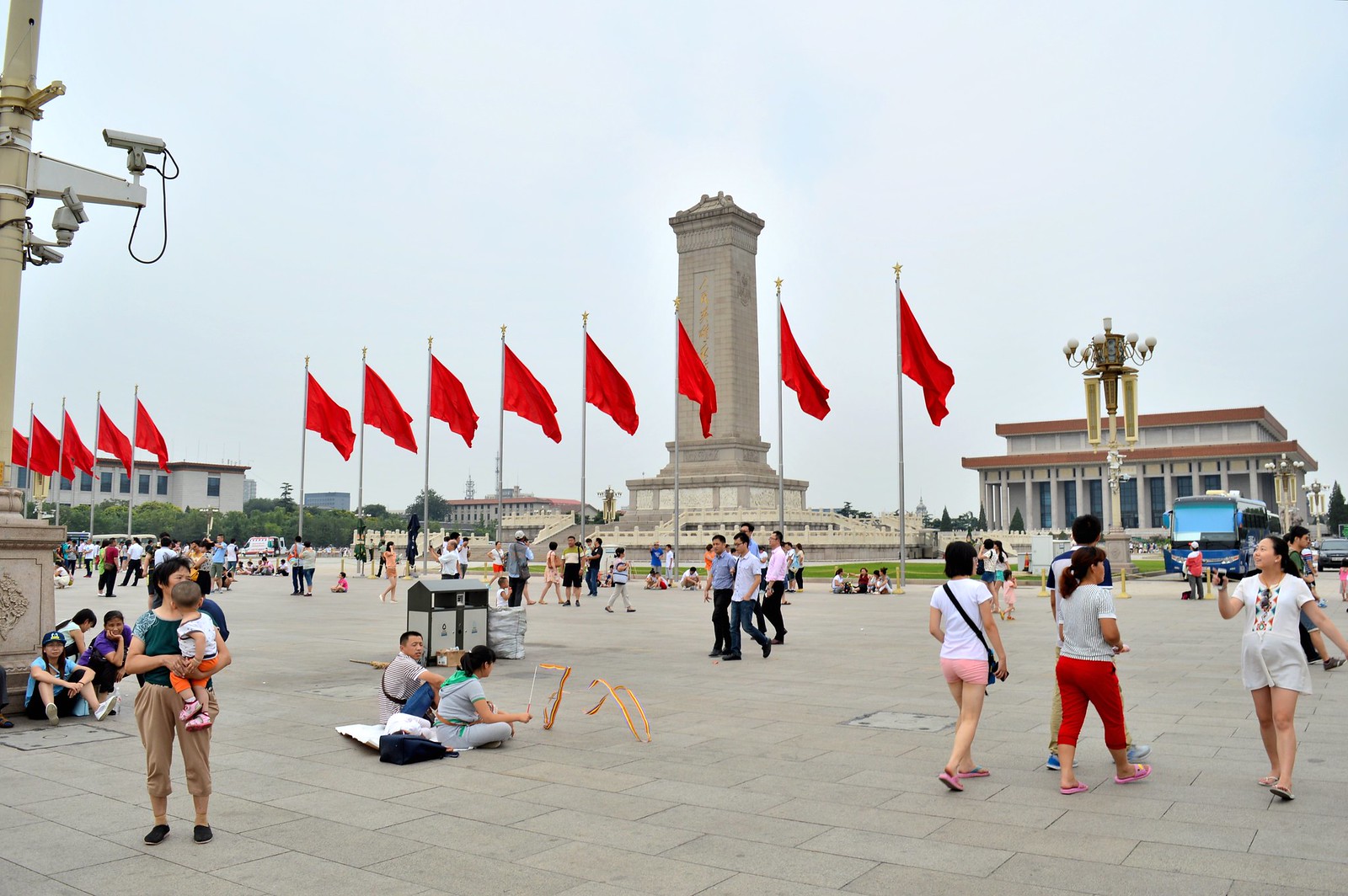 The History behind Tiananmen Square

Tiananmen Square is also the location where Mao Zedong proclaimed the founding of the People’s Republic in 1949. Tiananmen is a significant cultural symbol with a long history. In Western countries, it is mostly known as the site of the 1989 protests. However, there is a lot more history behind the square. The original square was built in 1651, after which it was enlarged four times. Its final enlargement was inspired by Mao Zedong’s vision to make the square “the largest and most spectacular in the world.”

The first version of the Tiananmen was first built in 1421, during the Ming dynasty. It was originally named ‘Chengtiananmen’, or ‘Gate of Accepting Heavenly Mandate’. The mandate of heaven is an ancient Chinese belief that heaven only grants the right to rule to a just leader (the Son of Heaven). If an emperor was unjust, he would lose his right to rule and the mandate would be lost. 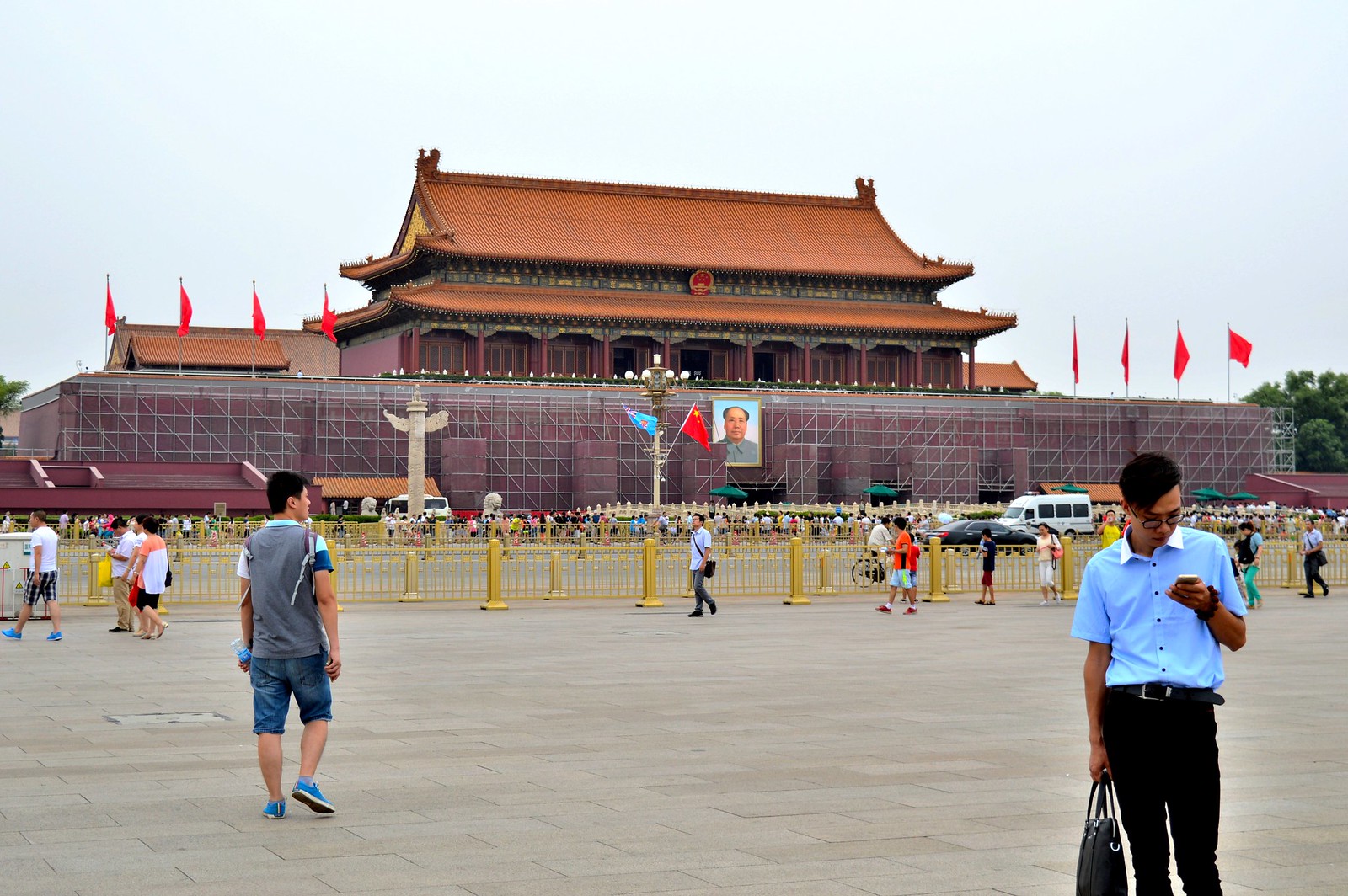 Tiananmen Square, with ‘Tiananmen’ translating into ‘Gate of Heavenly Peace‘, was named after the Tiananmen Gate, located north of the square. The gate is part of the imperial city walls and separates Tiananmen square and the Forbidden City inside the Imperial City.

Many of you will probably recognise Mao Zedong’s portrait, which has been there ever since the proclamation of the PRC 1949. Every year, the portrait is replaced by a new one before October 1, founding day of the People’s Republic. There have also been displays of other portraits on very special occasions, like the death of Stalin in 1953. 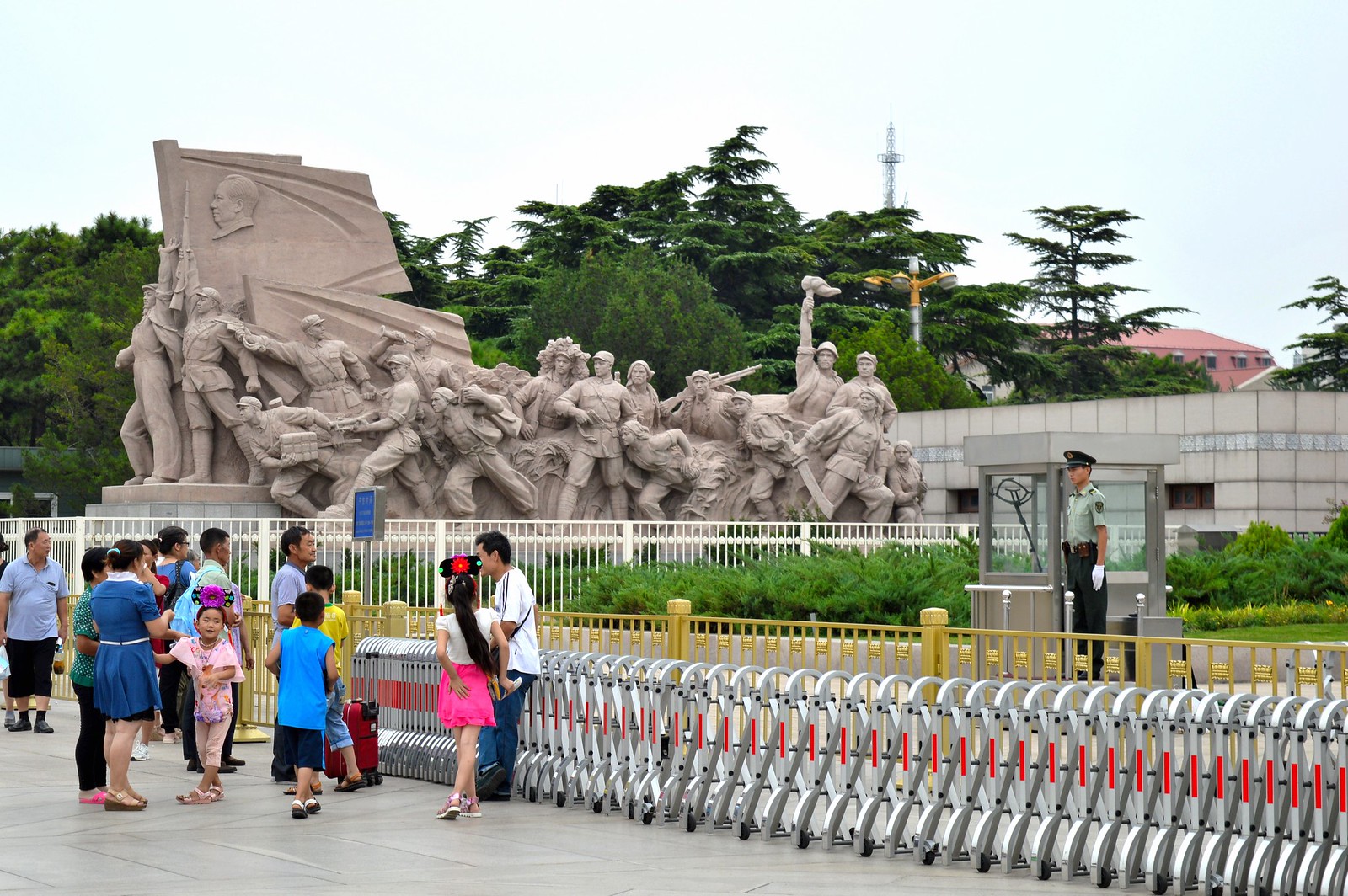 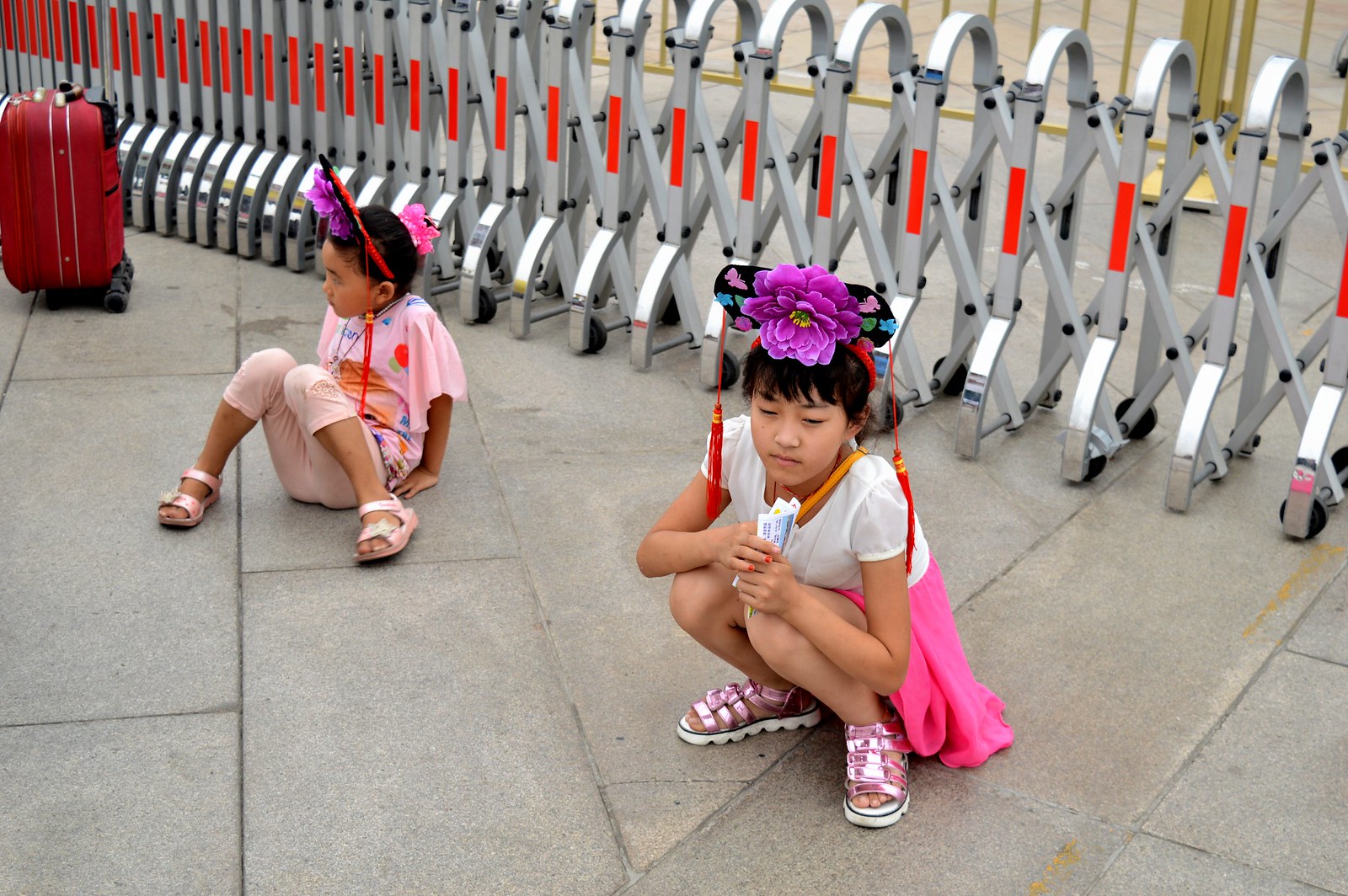 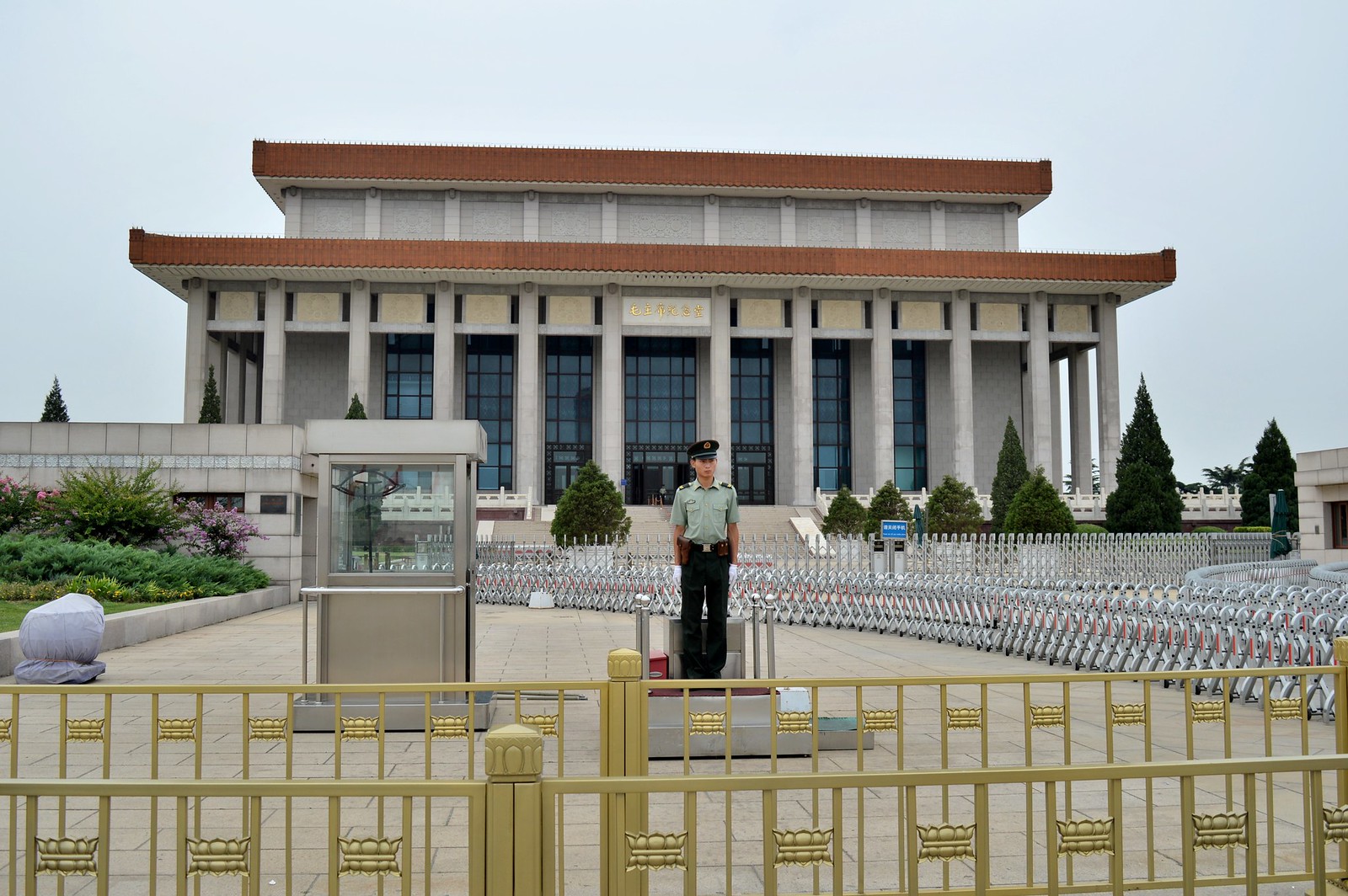 The Mausoleum of Mao Zedong

The Chairman Mao Memorial Hall in the middle of Tiananmen Square is the final resting place of Mao Zedong. It was built a year after his death on September 9, 1976 and still holds his embalmed body. Many people still visit the Mausoleum every day to pay tribute to the former chairman.

The mausoleum is located on the previous site of the ceremonial Gate of China. This gate was known as the ‘Great Ming Gate’ and ‘Great Qing Gate’ during the Ming and Qing dynasties respectively. The gate held the status of ‘Gate of the Nation’ and usually remained closed, except when the Emperor would pass through. It was demolished during Mao’s expansion of the square in 1954.

ALSO READ  The Story Behind the Monserrate Palace: From Abandoned Ruins to Literary Romance

Materials from all around China were used in the construction of the Mausoleum, such as granite from Sichuan province, pebbles from Nanjing, and quartz from the Kunlun Mountains. About 700,000 citizens from various provinces, autonomous regions, and nationalities performed symbolic voluntary labour before the Mausoleum’s completion in 1977. 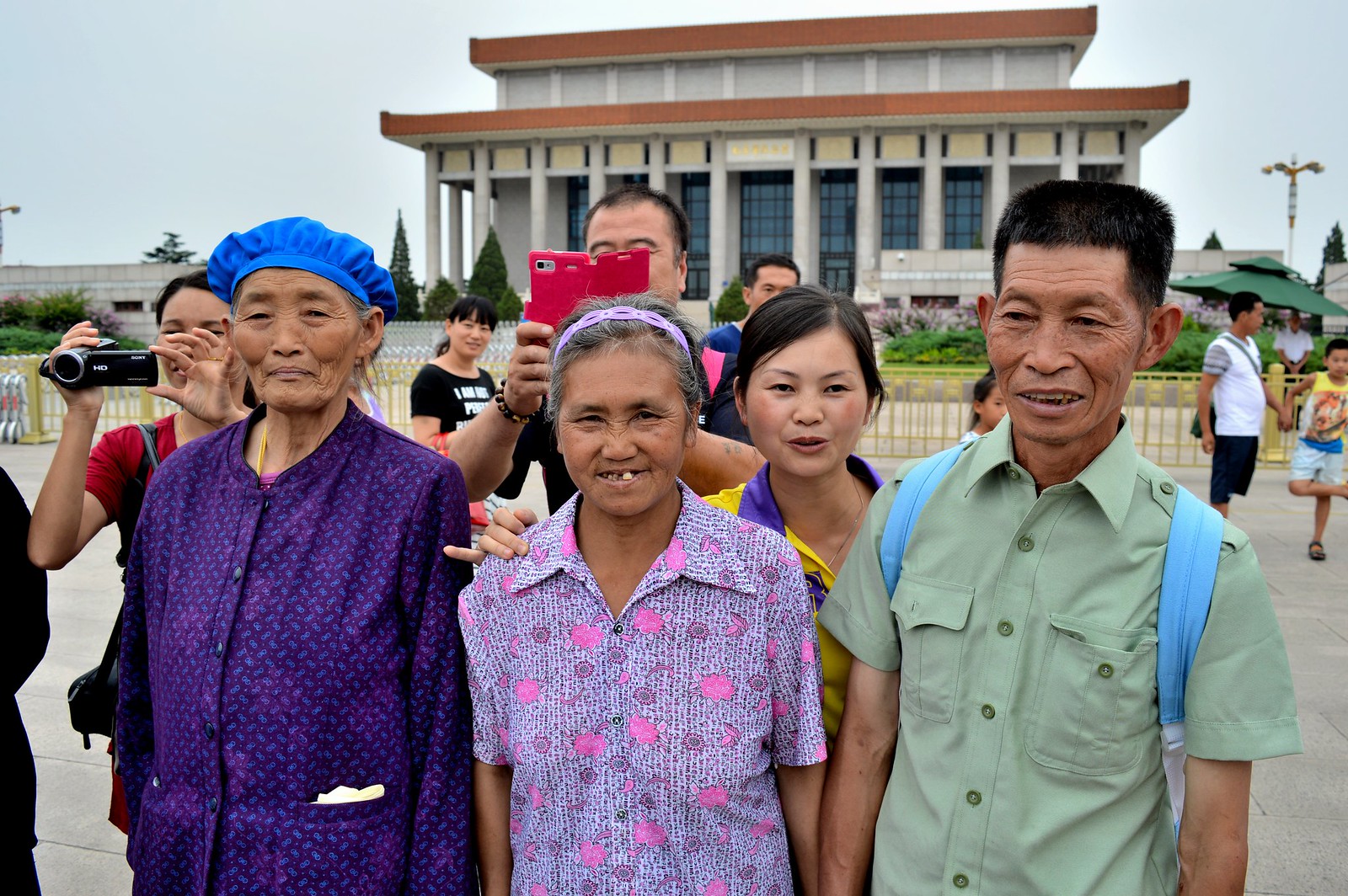 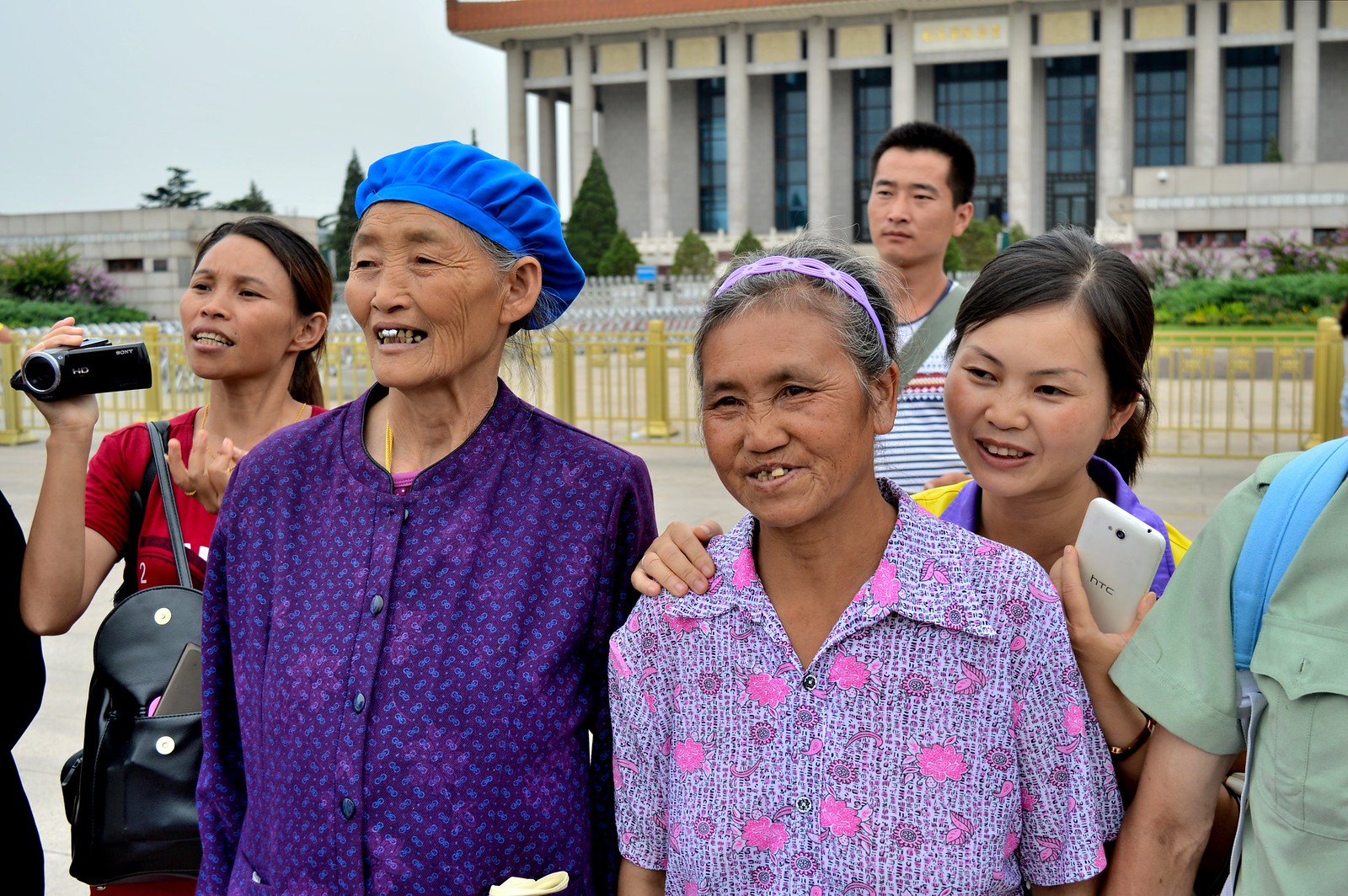 In front of the Mausoleum we also met these lovely people. They told us they were from the country side and it was their first time visiting the city. With one of our summer school group members acting as a translator, we told them it was also our first time in Beijing. We took pictures with them, they took pictures with us, and we all took pictures of each other. It was a wonderful encounter! 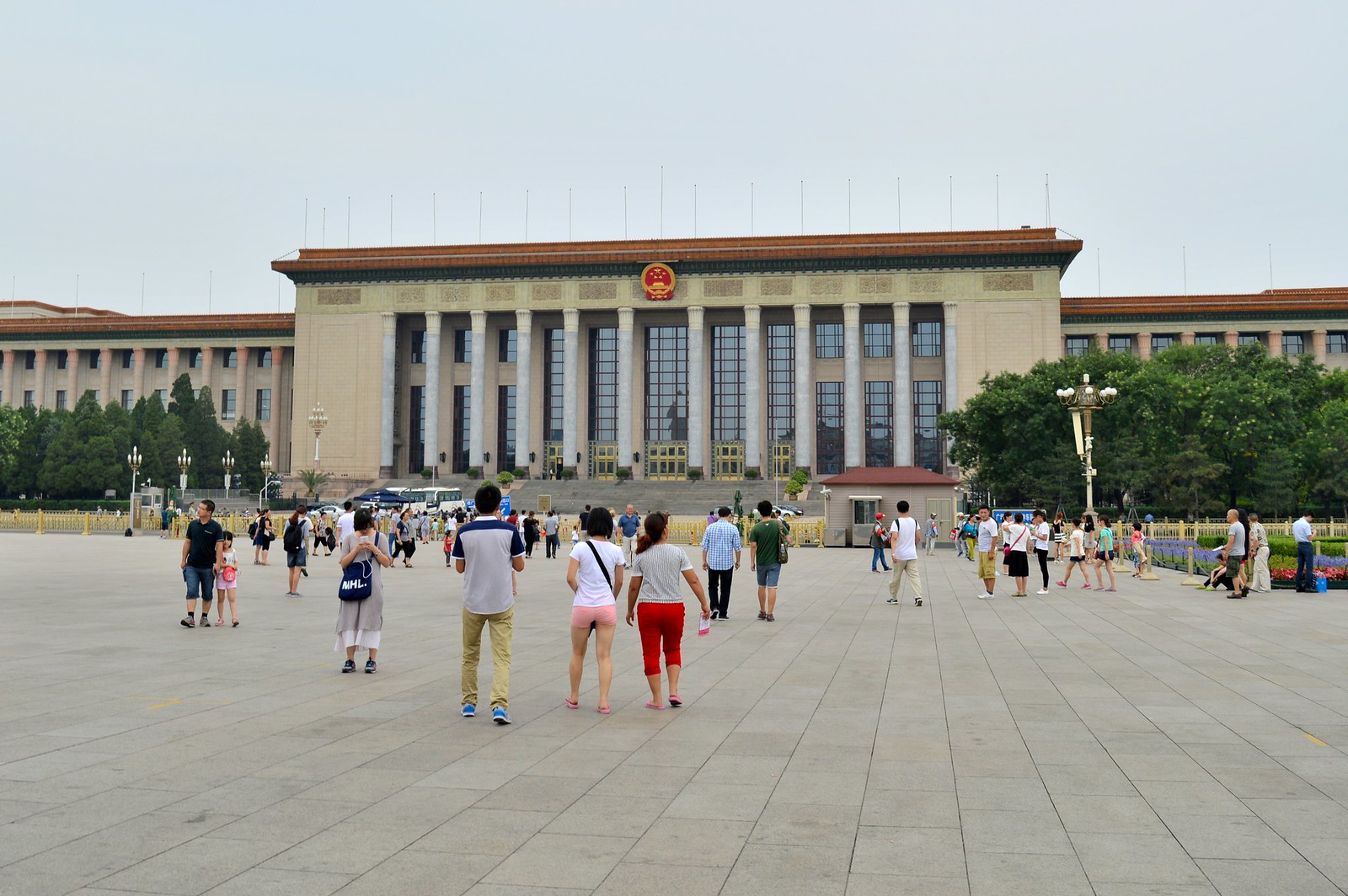 The Great Hall of the People and the One-child Policy

The Great Hall of the People, opened in 1959, is located on the West side of Tiananmen Square. It is used for legislative and ceremonial activities by the PRC and the Communist Party of China. This includes the national session of the Chinese People’s Political Consultative Conference (CPPCC) and the National Congress of the Communist Party of China, which occur once every five years. For example, it is also the place where the Communist Party recently had a four-day meeting discuss the possibility of relaxing the one-child policy to allow couples to have two children. 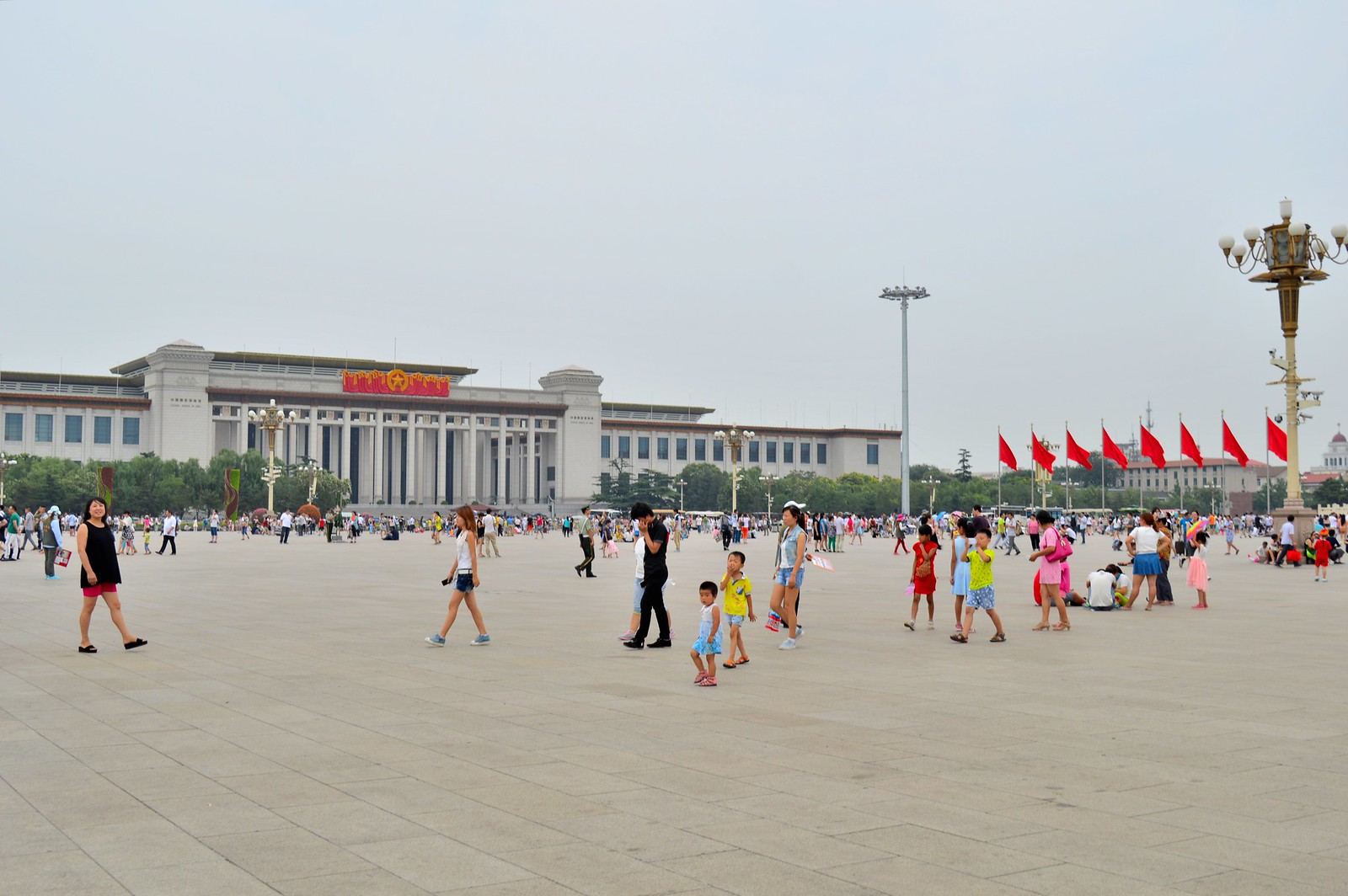 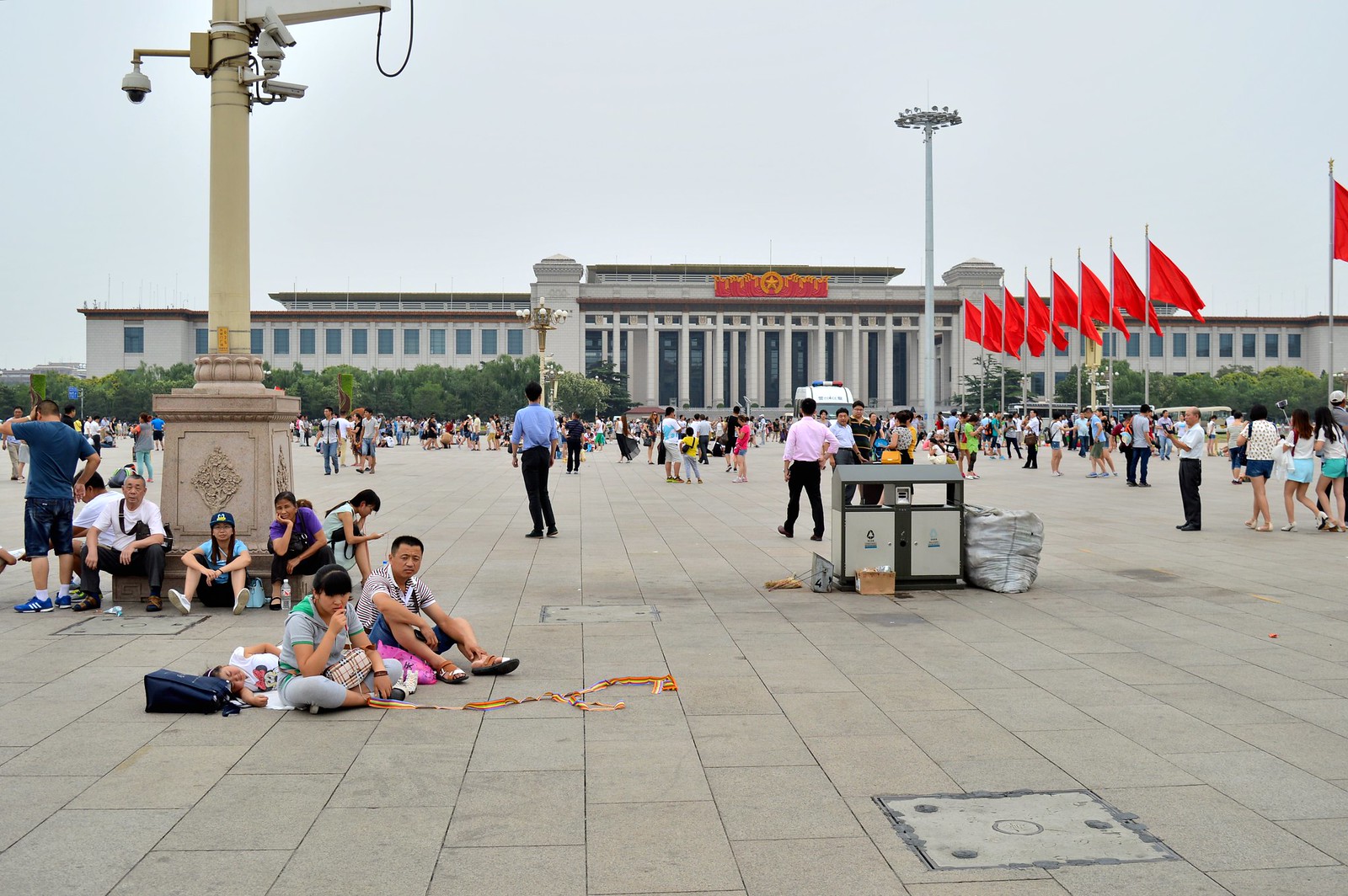 The National Museum of China

The National Museum of China is situated on the eastern side of Tiananmen Square. The aim of the museum is to inform and educate the people about the art and history of China. The museum was established in its current form in 2003, after the merge of the Museum of the Chinese Revolution and National Museum of Chinese History. Both museums were already housed in the current building, which is one of the ‘Ten Great Buildings’. These Ten Great Buildings celebrated the ten-year anniversary of the founding of the People’s Republic of China. 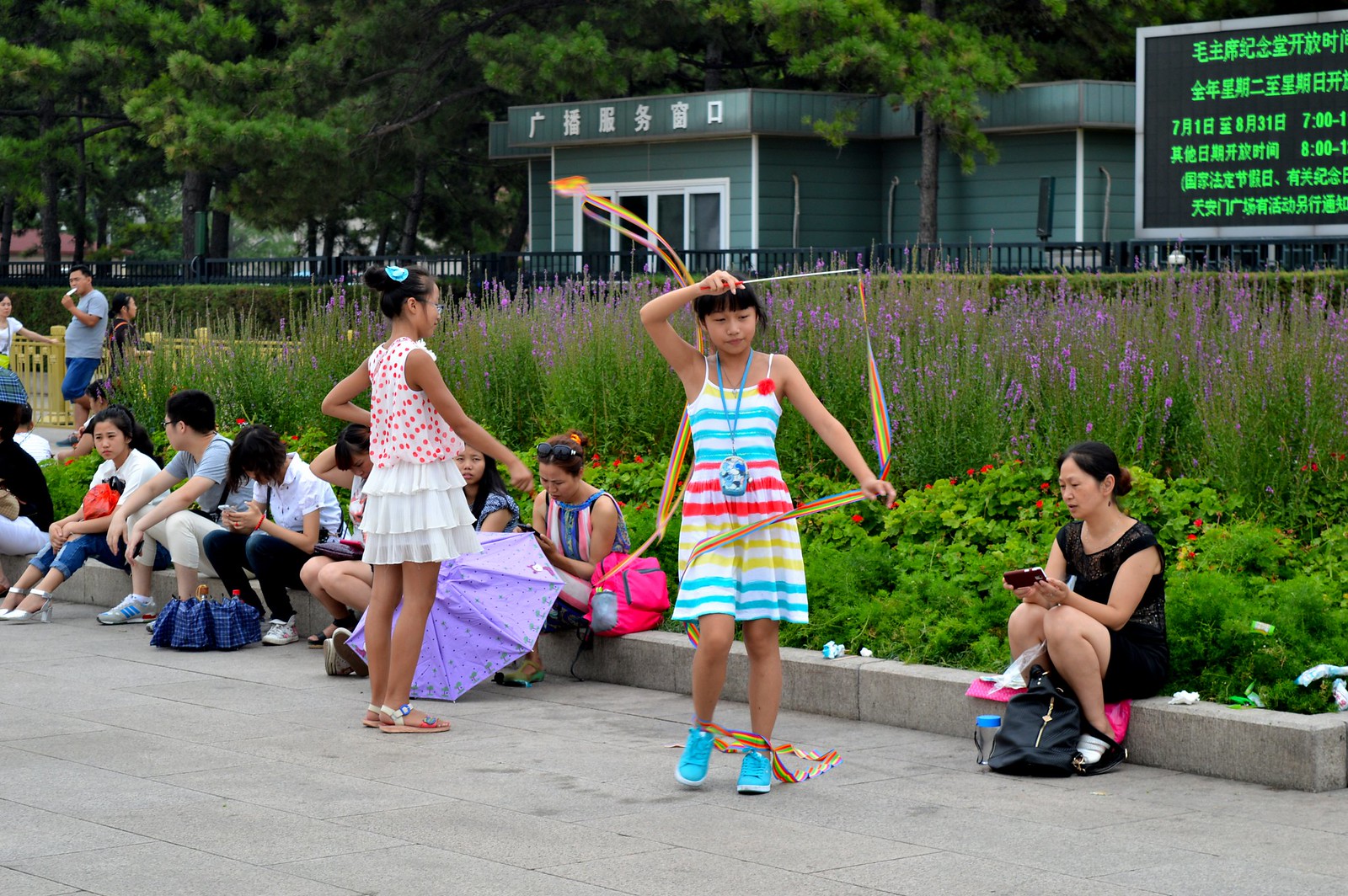 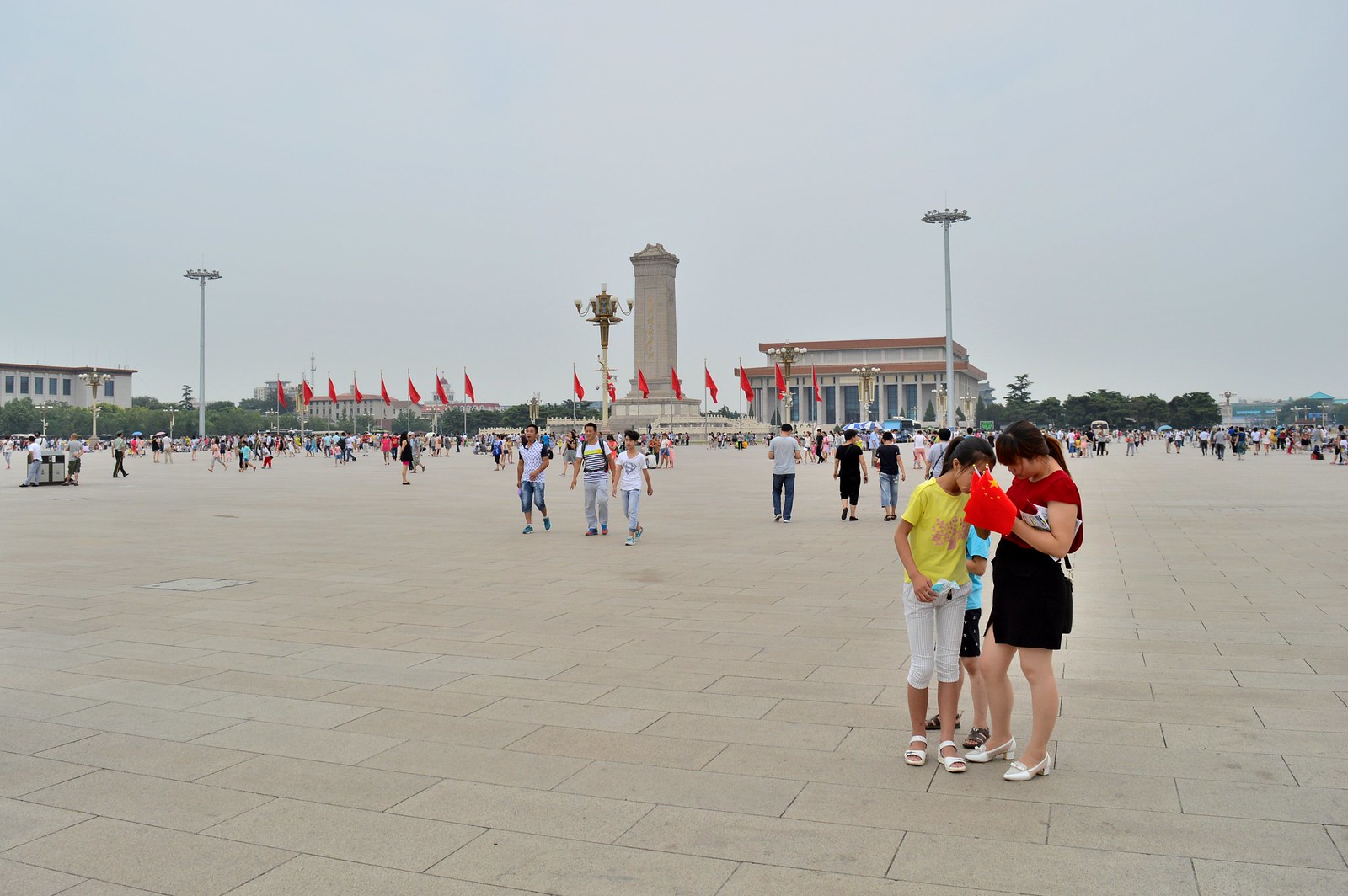 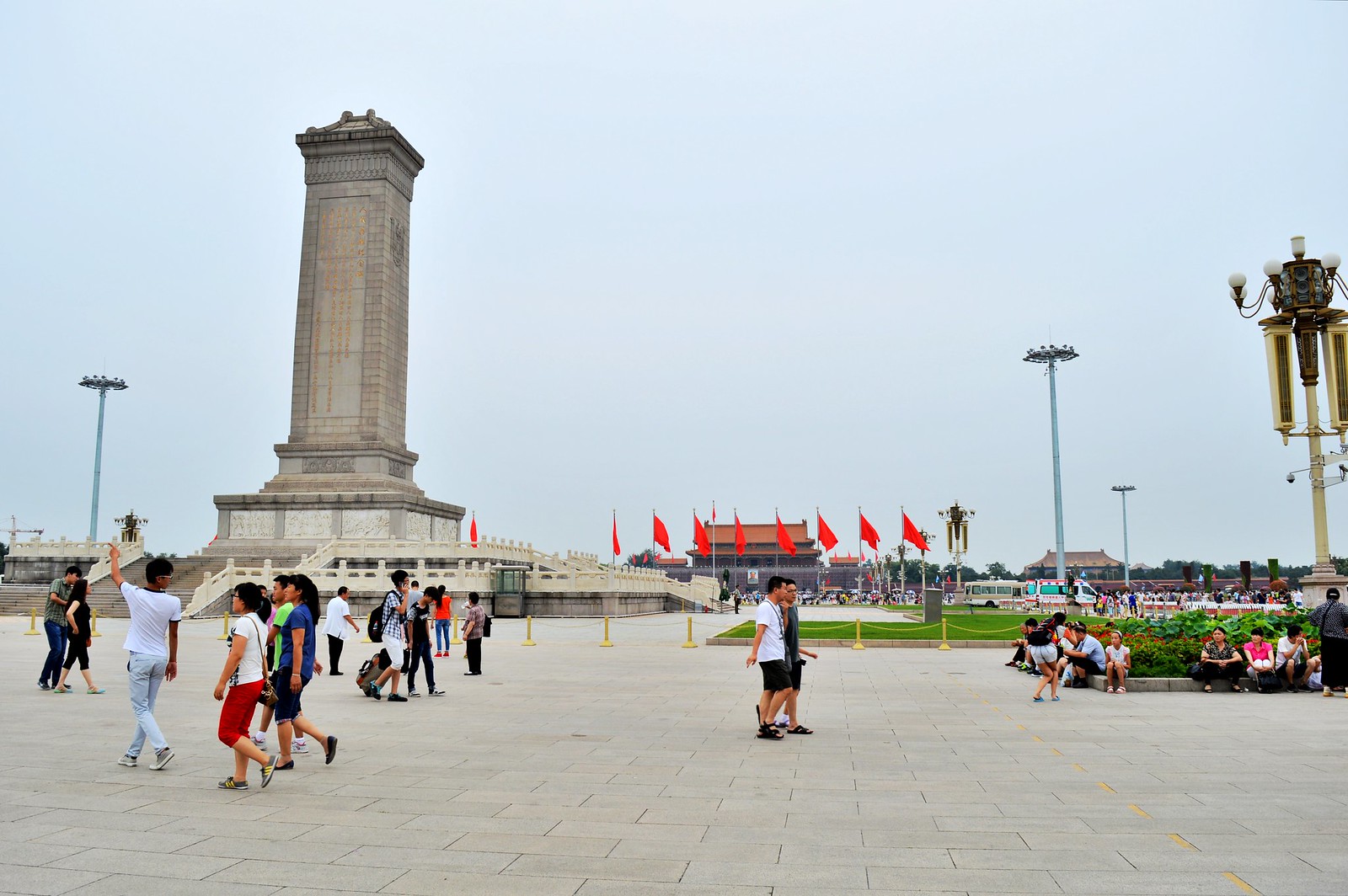 Monument to the People’s Heroes

The Monument to the People’s Heroes stands on the southern half of the Tiananmen Square, north of Mao Zedong’s Mausoleum. The ten-story and roughly 38m-tall obelisk was erected as a national monument of the People’s Republic of China. It is dedicated to the martyrs of revolutionary struggle during the 19th and 20th centuries. Nowadays, it is a place of mourning and commemoration. Since 1980, visiting foreign dignitaries (especially historical allies), and police and military units regularly lay wreaths at the monument.

After seeing it on television so many times, it was great to finally see the Tiananmen Square in real life. It was filled with families and tourists, excited to see the capital of the PRC. I certainly learned a lot while researching the history of the square, so I hope you also enjoyed reading this post. See you soon! 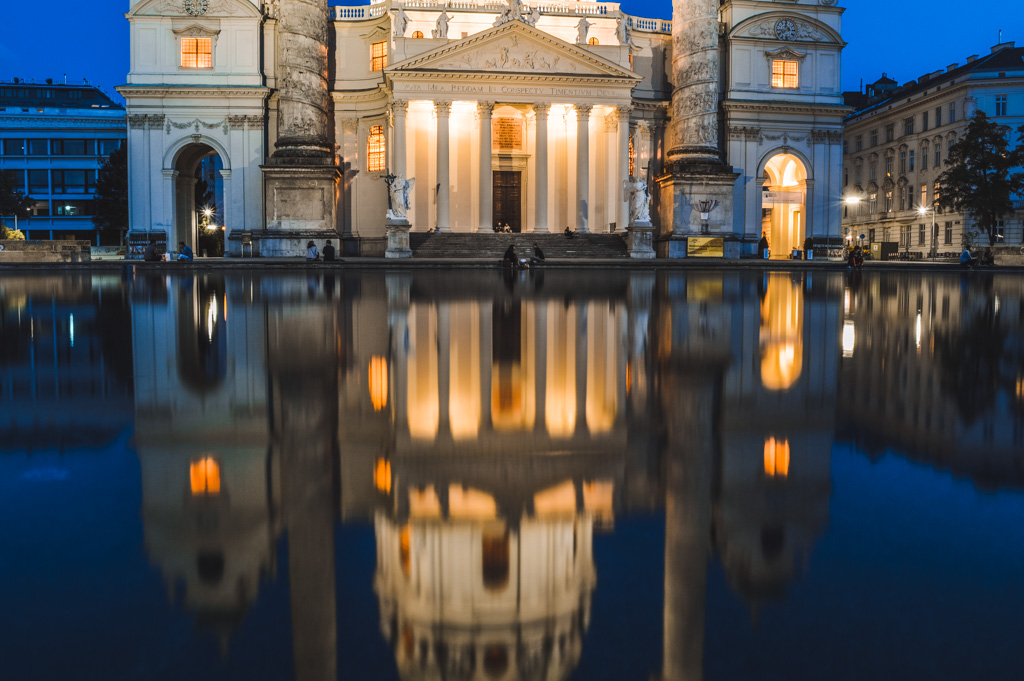