Have you ever wondered if you could visit the Beijing Olympic Park today? It’s been a while since the 2008 Summer Olympics, 11 years to be exact. Do you remember? I recall watching the opening ceremony and being really impressed with the performances. I had just turned 15 years old and watching the Olympics really sparked my interest in this fascinating country. What happens to all of those buildings after the end of such an international event, what does the Beijing Olympic Park look like right now? Well, I finally found out when I travelled to Beijing.

What does the Beijing Olympic Park Look Like Today?

One of the most enjoyable things I did during my trip to Beijing was visiting the Beijing Olympic Green park with friends. After a few long days of studying at Beijing Normal University’s summer school, we spent the evening exploring the Beijing Olympic Park. Although visiting so many temples and heritage sites like the Summer Palace was terrific, it was also refreshing to see a more contemporary type of urban architecture. We admired the stadium’s night lights, did some serious people-watching, and ate another ice cream. It was such a chill summer evening.

The Beijing National Stadium, a.k.a. the Bird’s Nest, is the true centerpiece of the Olympic park. Its lights and colours lit up the park and had a hypnotic effect on my eyes. The stadium was a joint project by Jacques Herzog, Pierre de Meuron, Stefan Marbach, Ai Weiwei, CADG, and Li Xinggang, although Weiwei distanced himself from the project in 2008. As you may remember, the Bird’s Nest stadium hosted the opening and closing ceremonies, as well as the athletics and football finals of the 2008 Games.

Winter Olympics Coming Back in 2022

In 2022, the stadium will host the 2022 Winter Olympics and Paralympics, including the opening and closing ceremonies. The stadium now mostly hosts football matches, although there are plans to turn the stadium into a shopping mall and hotel.

Cooling Down At the Water Cube: The National Aquatics Center

The Beijing National Aquatics Center was constructed for the swimming competitions of the 2008 Summer Olympics. The center is informally known as the Water Cube, although its actual shape is a cuboid (potaytoes, potahtoes). It’s safe to say it has already become a historic site at the Beijing Olympic Park today. The Olympic swimmers broke 25 world records during the 2008 games.

After the games, the cube underwent a 200 million Yuan transformation into an water park, which opened in August 2010. For the 2022 Winter Olympics, the cube is planned to host the curling competition.

Two other significant features at the Beijing Olympic Green park are the Ling Long Pagoda (blue tower) and Observation Tower (multicolored towers in the background). The 128 m tall Ling Long Pagoda belongs to the International Broadcast Center and has 6 triangle-shaped pods. Broadcast stations like the BBC, France Television, and NBC own studios in these pods, using Beijing’s real skyline as studio backgrounds.

The Olympic Park Observation Tower and its five different platforms offer optimal views of the Olympic Park, as well as the entire city of Beijing. The tower opened in 2014 and has five circular roofs, similar to the five Olympic rings. The observation tower is the the 22nd highest tower in the world.

Directly opposite the Water Cube and Bird’s Nest is the Pangu Plaza, also known as the dragon building. It’s actually not an Olympic building, but a hotel and office complex. The Pangu Plaza is the 7th tallest building in Beijing and you can spot it from almost everywhere in the city. It has managed to transform Beijing’s skyline, although it still reminds me more of a squishy marshmallow than a fearsome dragon. That doesn’t make it any less impressive, of course.

How to get to the Beijing Olympic Park

So, is it worth seeing the Beijing Olympic Park today? I definitely think so. It’s an interesting, contemporary urban space that has its own unique vibe, especially in summer.

There are buses that regularly stop at the Olympic Park, but the easiest way is to ride the subway. The subway system in Beijing is very easy to navigate, so we used it as our primary mode of transportation. Take line 8 and get off at Forest Park South Gate, Olympic Park (Bird’s Nest and Watercube). Alternatively, you can get off at Olympic Sports Center station. 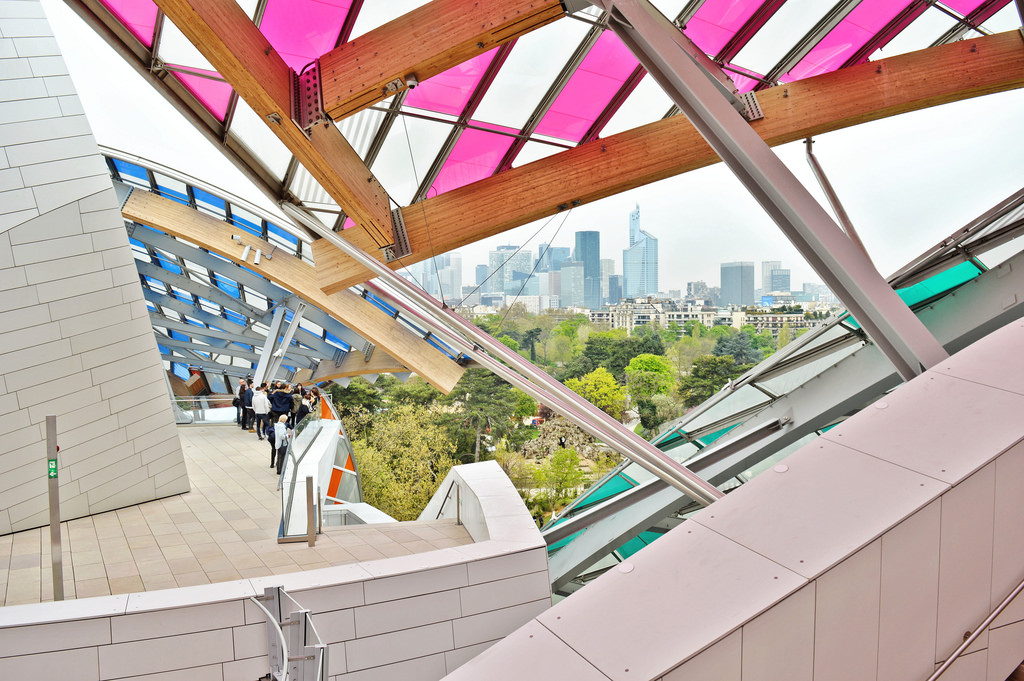